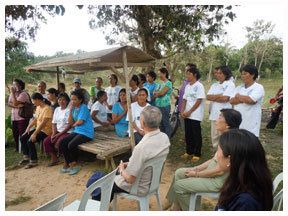 Lopezes donate land to Guimaras oil spill victimsLOPEZ Group Foundation Inc. chair Oscar M. Lopez (OML), with wife Connie and daughter Angela, visited Nueva Valencia, Guimaras to look at the progress being made by the cooperative Halad sa Guimaras which will be a recipient of land to be donated by the Lopez family.

Halad was formed to provide added income through agriculture to the victims of the Guimaras oil spill, which is described as the worst in the country.

In 2006, M/T Solar 1 sank off the coast of Guimaras and Negros Occidental. It was carrying more than two million liters of bunker fuel, about a quarter of which leaked into the waters of Western Visayas.

The National Disaster Coordinating Council had reported that the spill damaged about 234 kilometers of coastline, 1,143 hectares of marine reserves, 478 hectares of mangroves and 16 square kilometers of coral reefs. Meanwhile, nearly 14% of the approximately 150,000 people of Guimaras were affected,
and 4,000 fisher folk households lost their livelihood only four days after the incident.

On his most recent visit, OML told the co-op members that he hopes to see their income further increased after he announced the donation of a submersible pump to ensure a steady flow of water. He was accompanied to Guimaras by LGFI president Rafael M. Alunan III, Dario Pagcaliwagan and Dulce Festin-Baybay.