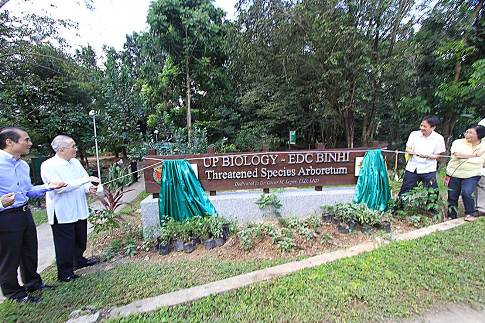 Energy Development Corporation has established a “Threatened Species Arboretum” in UP Diliman. The 1-hectare arboretum will serve as a gene bank for high-value but fast-dwindling native trees such as yakal, tindalo and kamagong. Shown leading the inauguration of the arboretum from left to right are EDC Chairman Federico Lopez, EDC Chairman Emeritus Oscar Lopez, UP Chancellor Michael Tan and UP Institute of Biology Director Sonia Jacinto.The arboretum will be the living laboratory for plant taxonomy classes, research areas for scientists, serve as the mother trees for future seedlings for reforestation and as an information center on native trees for the public.Geothermal leader Energy Development Corporation (EDC) has established an arboretum of threatened native species at the UP Institute of Biology (UPIB) in Diliman, Quezon City. The arboretum is a component of EDC’s BINHI Tree for the Future project which aims to save and propagate high-value but fast-dwindling Philippine trees such as yakal, tindalo, kamagong, mangkono and ipil.

EDC Chairman Emeritus Oscar Lopez and Chairman Federico Lopez inaugurated the arboretum together with UP Chancellor Michael Tan, College of Science Dean Jose Balmaceda and UPIB director Sonia Jacinto. The 1-hectare arboretum will serve as a seedling or gene bank for threatened Philippine tree species and a source of planting materials for forest restoration programs. 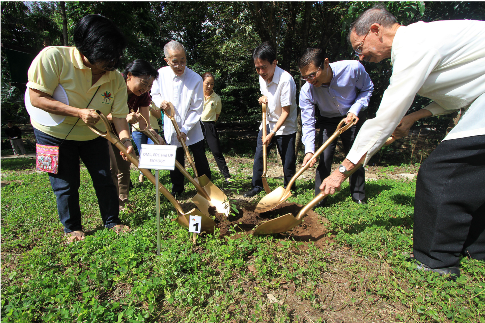 Enegy Development Corporation establishes threatened species arboretum in UP“With this arboretum, we are trying to prevent extinction of the country’s most premium endangered tree species which is what makes EDC’s BINHI project different from other reforestation projects.  We source the few remaining seedlings of endangered premium native trees and grow them into mother trees in planting sites where they can be best protected and nurtured such as in school grounds, public parks, leisure estates, residential areas and urban spaces as available. These mother trees will be used to propagate more seedlings for transplant all over the country,” Mr. Oscar Lopez explained.

More than 150 trees representing 79 premium endangered species will be planted in the arboretum.  These will be properly labeled consisting of scientific names, distribution, ecological status and uses, families and forest formations.  As such, the arboretum will serve as a living laboratory for taxonomy students, faculty and researchers of the UP Institute of Biology to undertake research and better understand Philippine forests.

Through the BINHI Tree for the Future project, EDC has been able to rescue and secure 88 of the 96 priority endangered species.  EDC is probably the only organization in the country that is heavily involved in the rescue of the Philippines’ rarest and most endangered premium tree species.

UPIB is EDC’s 109th partner for the BINHI Tree for the Future project.  As a BINHI partner, UPIB will share in the responsibility of implementing the long-term protection, monitoring and maintenance of the planted trees until these have grown into mother trees.  UPIB will also provide yearly updates on the status of the seedlings for the EDC-DENR BINHI website and database.

Launched in 2008 using EDC’s three decades of experience in integrated social forestry as platform, BINHI has become a model for corporate-led reforestation programs among Philippine businesses. (Story/photos by: Toni Nieva)