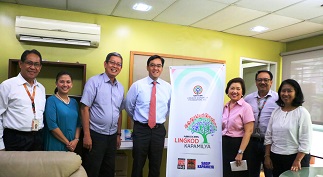 The two were brought together by Sagip Kapamilya, the flagship project of ALKFI. EDC has been a longtime supporter of Sagip Kapamilya. Among their biggest tie-up projects is the building of typhoon- and earthquake- resilient classrooms for typhoon Yolanda-affected areas which started in 2014. EDC provided the design, manpower and project supervision for 89 classrooms.

Afan said: “I last saw Ricky when he was 16 years old. We’ve led very different lives, but are now reunited as partners decades later in being able to become men and women for others through our projects together. What a dream come true for any teacher!”

Tantoco recalled that Afan, his religion teacher, would ask the class to write “Ad maiorem Dei gloriam” on their test papers as a way of reminding them to do all things for the greater glory of God.

“It feels great to see a former teacher who is now a dear friend doing something for the betterment of society,” he said.

Before her appointment as the managing director of ALKFI, Afan spent 30 years in the US where she built a successful career in recruitment. She was the Southern California District president of Robert Half International, $4.2-billion professional staffing services company. In 2005, she was recognized as its top regional manager in the world.

Tantoco, on the other hand, has been with EDC for over 23 years, holding several executive positions until he became its president and COO in 2009. He is also a director and executive vice president as well as the former head of business development at First Gen Corporation.

The afternoon ended with the teacher and student— now partners in public service— committing to work together on more projects in the coming years.