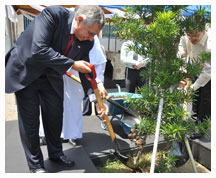 Richard TantocoENERGY Development Corporation (EDC), the Embassy of Chile and University of Santo Tomas (UST) marked their partnership for a green legacy with a tree planting activity at the UST Bicentenary Garden.

The tree planting was also part of the celebration of the 200th anniversary of the independence of Chile. The Embassy of Chile and UST chose EDC’s BINHI: Tree for the Future project as their vehicle to help in environmental protection.

BINHI is EDC’s nationwide reforestation and biodiversity preservation project which aims to rescue and secure the gene pool of the country’s endangered premium trees by planting and growing their seedlings into socalled mother trees in school grounds, public parks and other safe havens. These mother trees will later on produce the seeds that will be used in future forestation projects.