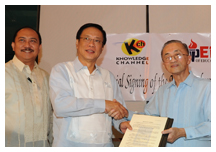 KNOWLEDGE Channel Foundation Inc. (KCFI) and the Department of Education (DepEd) signed a memorandum of agreement to renew their 10-year partnership for the nationwide development of basic education tools through the Knowledge Channel.

Meanwhile, the DepEd City Schools Division of Dumaguete City was recognized for pioneering implementation of a semiannual strategic plan designed to sustain the project.

The KOSA was launched this year to recognize beneficiaries and partners who have shown outstanding support to the Knowledge Channel program.

In addition, it aimed to present best practices in the public education system resulting from implementation of the program. The Institutional award was presented to Education Sec. Jesli Lapus who was recognized as one of the leading advocates for improved classroom interaction through information and communication technology. 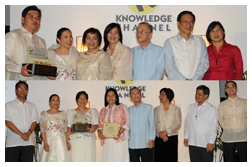 Past secretaries of the department were also acknowledged for their invaluable contribution that fostered an environment of continuing development of the nationwide educational system. In accepting the award on behalf of awardees from the department, Sec. Lapus commended KCFI for its relentless efforts in support of basic education. OML thanked program partners who provided opportunities for the foundation to deepen its commitment and maintain relevance and responsiveness to the public education sector and to the needs of the Philippines as a nation.

Lopez-Bautista meanwhile urged stakeholders to join the foundation as it continues to broaden the reach of the program beyond the 2,000 schools that are presently connected to Knowledge Channel.

She added that “the channel will continue this advocacy well into the next decades keeping up with trends in technology and learning but always with the development of our children and our nation in mind.”

Meanwhile, KCFI and banking firm Citi Philippines have co-produced “Estudyantipid”, a series that will teach children simplified economic and financial concepts and money management. It is the first show on financial literacy. It will orient young students on ways of using and saving money properly, the concepts of the differences of needs and wants, wealth, interest and inflation. Citi Philippines has been a KCFI stakeholder for the last eight years and is co-producing a program on the Knowledge Channel (KCh) for the first time.

Also enriching the KCh program grid is “Mi Isla”, a ten-episode program that will educate students on about saving the environment one step at a time. The Philippines is home to an astonishingly high marine life, particularly along the Verde Island Passage - an important domestic sea route that encompasses the provinces of Batangas, Marinduque, Mindoro Occidental, Mindoro Oriental, and Romblon. This area is known as the “Center of the Center” of the global marine fish shore biodiversity. Although it is rich in marine life, the people and natural resources in the Verde Island Passage are facing numerous challenges in terms of habitat destruction, law enforcement, and population pressure, among others. “Mi Isla” was filmed in Verde Island.