Momay is the girl to beat! 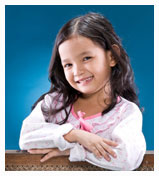 MomayXyriel Manabat, who became a household name after showcasing her acting skills in “Agua Bendita,” stars in the new primetime series “Momay.” “Momay” is the story of a child who died in an accident but whose spirit stayed on earth to help her family. The show’s pilot episode toppled the other networks’ shows by earning a solid 22%, according to the Taylor-Nelson Sofres ratings results. Catch Xyriel as she visits you weekdays on the primetime block of ABS-CBN in “Momay.”