Be Careful with My Heart cast Jodi Sta Maria and Richard YapABS-CBN Corporation, the Philippines’ largest and leading multimedia conglomerate, opened the year 2013 on top as more Filipinos across urban and rural homes all over the country tuned in to its programs last January, with a total day share of 40%, or seven points higher than GMA’s 33%, based on data from Kantar Media.

ABS-CBN continued to rule key territories Balance Luzon (all areas in Luzon outside Mega Manila) with a total day audience share of 41% vs GMA’s 37%; Visayas, with an even wider lead of 47% vs GMA’s 27%, and in Mindanao with 53% vs 22%.

ABS-CBN also maintained its nationwide primetime supremacy (6PM-12MN) in January with a 44% audience share, a 13-point lead over GMA’s 31%. This dominance was mainly driven by ABS-CBN’s top caliber drama teleseryes, including the number one most watched program “Ina Kapatid Anak” with a national TV rating of 32.8%.

The primetime block is the most important part of the day when most Filipinos watch TV and advertisers put a larger chunk of their investment in to reach more consumers efficiently. 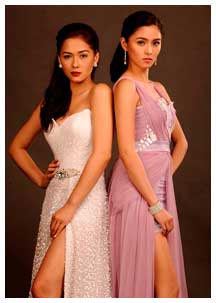 “TV Patrol” remained as the most watched newscast with 29.6%, while “Be Careful with My Heart” still triumphs as the country’s highest-rating daytime program with a 26.3% national TV rating.

“Kailangan Ko’y Ikaw” starring Kris Aquino, Anne Curtis, and Robin Padilla also rated high at 21.7%, while game show “Minute to Win It” debuted strongly on its morning timeslot with an average rating of 20.8%.

ABS-CBN’s noontime program “It’s Showtime” also prevailed during the said month with a national TV rating of 12%, or five points higher than TV5’s “Wowowillie” that only rated 7% on its first three days.

Also proof of ABS-CBN’s leadership in TV ratings nationwide are the successive awards it received recently, namely the Most Development-Oriented TV station from the 2013 Gandingan Awards awarded by UPLB students; the Best TV Station of the Year from the Netizens’ Choice Awards determined from a poll conducted by top entertainment blogs Showbiznest, LionhearTV, and Starmometer; and the Best TV Station from the 26th PMPC Star Awards for Television given by the entertainment press.

Kailangan Ko'y Ikaw Stars Kris Aquino, Robin Padilla and Anne CurtisKantar Media is a leading television (TV) audience measurement provider with capabilities in gathering TV viewing data in both digital and analog platforms. It Is a multinational market research group that specializes in audience measurement in more than 80 countries, has 26 TV networks, ad agencies, and pan-regional networks subscribing to its ratings services.

ABS-CBN shifted to Kantar Media/TNS after filing a case vs. AGB Nielsen Media Research for failing to comply with its request to investigate alleged cheating and data tampering in TV ratings. The case is still pending in court contrary to claims by GMA, which is not a party to the case, that it has been resolved.