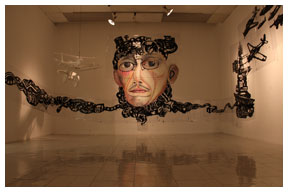 Ernest ConcepcionDid you know that there is a place in the Philippines where you can find a museum, library and conservation laboratory sharing floor space? Its setup places the 52-year-old Lopez Memorial Museum and Library apart from other Philippine museums. More than that, it is one that allows for a seamless and dynamic interaction among the institution’s programs—exhibitions, education and conservation among them.

With a rebooted vision and mission statement that has recast it from repository to steward, protector, enricher and advocate of its holdings, the Lopez Museum contributes “meaningfully to the education and cultural fulfillment of its various audiences.”

“It requires us to reach out and engage with current voices, to partner with different institutions to create a larger awareness of Filipino art and culture in the contemporary sense and be more relevant. It also pushes us to strengthen our engagement with contemporary artists,” museum executive director Cedie Lopez Vargas said of the update.

Installation shot of gallery with the works of Felix resurreccion Hidalgo on exhibitThus, for years now, exhibits at the Lopez Museum have no longer been confined to wallbound works. Visitors are as likely to see installation, video or performance art as Lunas, Hidalgos and Sansos when they attend a Lopez Museum event. Pushing boundaries even further, the museum regularly ventures outside of its four walls, literally and virtually.

“Everything is always rooted in a theme that’s carried by the art collection because we make it a point to marry its voice with more contemporary voices,” Vargas noted. “We are strengthening this connection further so that it comes to a point where you don’t think of just the art collection or just the library because everything has been interwoven.”

This means visitors who view an exhibiting artist’s work in effect also see the research that the latter conducted in the library in the process of preparing for the show. 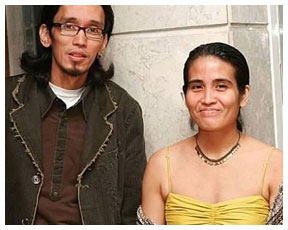 “There is a deliberately forlorn and somber tone to this outing. Images of the prostrate and crestfallen easily evoke a stance of defeat, a succumbing to odds,” Eileen Legaspi-Ramirez wrote in her curator’s notes.

“But Beat also linguistically traverses a more mobile positionality, possibly one that suggests a desire to plod on in sheer resilience or blind resolve. By staying on in the present tense rather than as the more definitive ‘beaten,’ this exhibition also conscripts the energies of artists Nikki Luna and Ernest Concepcion to effect stagings of confrontation with the difficult, the resistant and even the impossible.”

Beat continues the Lopez Museum’s explorations of the intersections of the colonial and recent past alongside contemporary issues. 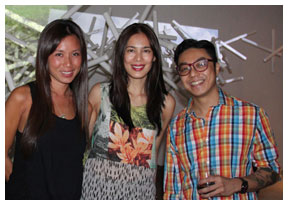 Artists Nikki Luna and Ernest Concepcion flank guest Angel AquinoAccording to Vargas, when it was first opened to the public in 1960, the Lopez Museum was primarily a library housing the rare books owned by her grandfather, Lopez Group founder Eugenio “Eñing” Lopez Sr.

Don Eñing was a nationalist— a year later, he would go on to orchestrate the buyout of Meralco from the Americans— with a penchant for going on book hunting trips abroad. He snapped up valuable first-edition Filipiniana books and manuscripts, periodicals and maps that made up the core of his collection. Along the way, he had also put together “the single largest collection of Lunas and Hidalgos of any individual or institution,” including Luna’s iconic “España Y Filipinas” and Hidalgo’s “La Barca de Aqueronte” and “El Asesinato del Gobernador Bustamante.”

Beginning at the close of the 1980s, Eugenio “Geny” M. Lopez Jr. and Roberto M. Lopez sought to bring the museum’s art collection up to par with the holdings of the library. Don Eñing’s sons led the push to acquire more artworks, especially those by Filipino modernists and National Artists, thereby infusing the exhibits with a more contemporary flavor.

The art collection includes about 600 masterpieces, while the library’s ever-growing collection boasts of more than 20,000 materials on Philippine history and culture. 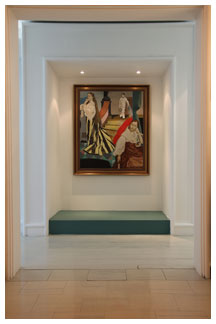 Installation shot of Bencabs Recuerdos oil on canvas 1985In 2005, the museum started its massive digitization program. The undertaking’s thrust was fourfold: “to capture, catalogue and store images of original materials; make these images searchable/accessible/retrievable for a greater range of users; protect and preserve the originals by reducing handling; and contribute to making the operation of the library cost-efficient.”

The program has borne fruit in the gratified reactions of researchers who come expecting to dig through the archives using good old elbow grease.

“They’re very happy to have discovered that our materials are now digitized and easy to access, which means we are now more accessible to younger researchers,” Vargas noted. “After all, one of our commitments is to make ourselves very accessible and researcher friendly.” 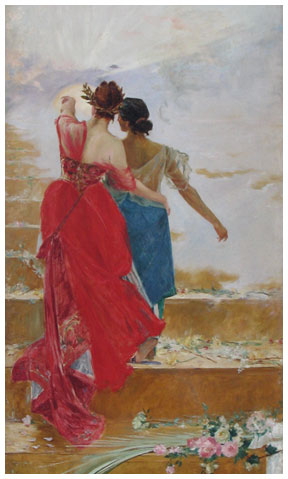 Juan Luna Espaa y FilipinasA parallel program to digitization is conservation. The Roberto M. Lopez Conservation Laboratory, named for Don Eñing’s youngest son who was one of the museum’s early advocates, attracts its share of clients and kudos despite deliberately not advertising its services. A guest from Germany even expressed amazement that such a gem existed in a country like the Philippines. Vargas had to explain that the lab was concentrating on building its expertise and deepening its bench of technical consultants before going full blast in accepting outside jobs.

For now, the requirements of the museum’s own collection are paramount, although about 50% of the work the lab does is for external clients. As Vargas stressed: “If you don’t take care of what you have, you’re actually taking two steps backward. You have to move forward, that’s why the stewardship, the caring and the preservation of our collection is important.”

Meanwhile, the museum’s institutional collaborations are going strong, particularly the Locus Redux fora and Zero In, the 11-year-old consortium with four other Manila-based museums. 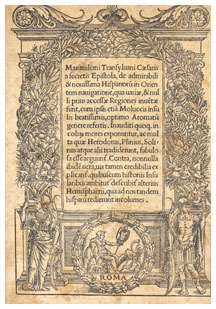 De Moluccis Insulis 1524For 2012, the Zero In members— the Lopez Museum, Ateneo Art Gallery, Ayala Museum, Bahay Tsinoy and Museo Pambata—will take to the provinces to share their expertise with communities outside of Manila. As part of the pilot program, they will help a town in the Visayas put up its own community museum.

Through all these programs and collaborations, the Lopez Museum—one of the most enduring and constant legacies of Don Eñing—hopes to remain relevant and to sustain its contemporary voice, Vargas said.

Through all these programs and collaborations, the Lopez Museum—one of Don Eñing’s most enduring and constant legacies—hopes to remain relevant and to sustain its contemporary voice, Vargas said.