Who can forget Bugs Bunny as “The Rabbit of Seville” doing a Farmville on Elmer Fudd? There was Mickey Mouse and a gaggle of farm animals performing “William Tell Overture,” and a feuding cat and mouse wreaking havoc on an orchestra in “Tom and Jerry in the Hollywood Bowl.” Or Bugs again as the no-baton conductor Leopold Stokowski exacting revenge on “Giovanni Jones” in “Long-Haired Hare.”

With the birth of the ABSCBN Philharmonic Orchestra (ABS-CBN P.O.), Filipinos are in for a reintroduction to a genre of music that they thought they never knew.

For the younger generation, the ABS-CBN P.O. will help them open their ears and minds to classical music’s greatest composers. They might find a kindred soul in “symphonist of death” Gustav Mahler, marvel at the genius that went into the 340 hours of music written by Haydn, or simply be awed by the works of Liszt, Rachmaninoff, Beethoven and Mozart.

Last year, a chance meeting between Federico R. Lopez (FRL) and music wunderkind Gerard Salonga served as the spark that led to the eventual creation of the 40-piece ABSCBN P.O. Beginning June 2011, FRL and Salonga had engaged in a back-and-forth about the state of orchestras in the Philippines, as well as issues plaguing arts groups in general.

“He’s very aware of what’s going on in the industry,” Salonga says of the First Philippine Holdings Corporation (FPH) chairman and CEO. 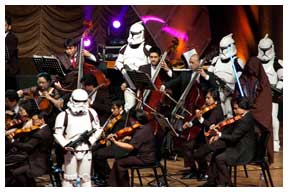 ABS-CBN chairman Eugenio L. Lopez III (EL3) also revealed plans for the network to put up its own orchestra but didn’t know how or where to start in organizing one.

Over several months, the discussions became more clear-cut: how FPH could help FILharmoniKA, Salonga’s then six-year-old orchestra; the manpower, musicians and instruments that would be required; and later, the new group’s possible name.

According to Salonga, he was at the Cultural Center of the Philippines (CCP) for a rehearsal for a concert with his sister Lea, Cecile Licad and Lisa Macuja in March 2012 when he got the call: “Gerard, there will be an ABS-CBN orchestra.”

The newest joint venture of FPH and ABS-CBN that aims to “connect and reinstate symphonic music into the lives of the Filipino people and its younger generation” was born. Salonga and 20-year ABSCBN veteran Mickey Muñoz were named music director and managing director, respectively.

By April, auditions were organized to fill the positions, some of which were carried over from FILharmoniKA.

“What I did was, I took what worked. There were some really good things about FILharmoniKA which I wanted to bring here, and to make getting off the ground much faster,” Salonga said.

“We had a pretty rigorous screening process. We purposely put them under a lot of pressure because aside from doing what we do for the orchestra, we have to do stuff for the TV station and that entails a lot of very tight deadlines. No rehearsals, you have to sightread the music on TV.”

ABS-CBN P.O. is composed of 40 professional musicians whose ages range from 23 to 60-something. The concertmaster, 27-year-old Ralph Taylan, took over from the original concertmaster who relocated to Germany in August. The principal trombonist, Romeo San Jose, was also a founding member of the Philippine Philharmonic Orchestra, as well as the defunct San Miguel Philharmonic Orchestra and FILharmoniKA before joining the ABS-CBN P.O. The music director’s wife, Divina, is a violinist who also put in a stint teaching the kids of the OFY.

By June, the new orchestra was ready to make its debut. That month alone, the ABSCBN P.O. had performed the new ABS-CBN jingle “Hindi Sumusuko” in celebration of Independence Day; at a trade 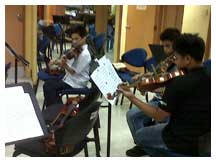 Rizal’s offering—OFY violinists from Taytay and Angono at rehearsallaunch; and a major concert at the SM Mall of Asia Arena in addition to staging an exclusive Kapamilya concert.

Thus far, the ABS-CBN P.O. has strutted their stuff in more than a dozen concerts, both public and private. Aside from the hour-long concerts for children to introduce them to classical music and the other types of music that a symphony orchestra can play, Salonga counts the John Williams concert in September and the October performance at the Mandarin Hotel as among the most memorable.

Then there was their performance at the Philippine Ballet Theater’s production of “The Nutcracker” in November, which they pulled off after two four-hour practice sessions on Monday and Tuesday and another one with the ballet dancers on Wednesday. By Saturday, the group was ready to put on a show.

“It was very difficult, we were under extreme time pressure to learn a full-length ballet in just two sessions. But an experience like that really strengthens the bond amongst the musicians and brings us together,” Salonga noted.

For Lopez Group employees who want to see the ABSCBN P.O. in action, Salonga suggested rounding up at least a hundred colleagues and calling up the orchestra’s education specialist, Chris Graham, to organize a Kapamilya concert at the Dolphy Theater.

“Kapamilya concerts are the adult versions of the children’s concerts that we do. We’ll play pop, film music just to get them interested, then we’ll inject classical music while they’re there just to give them a taste of what it’s like,” Salonga promised. 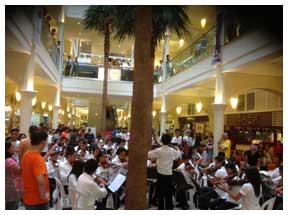 The OFY wows visitors during a recent performance at Power Plant Mallhe music of the ABSCBN P.O.: “You don’t have to know anything about it. All you have to do is go there with open heart, open mind and get ready to feel whatever you want to feel. That’s it. There’s no right way or wrong way to listen to it.”

In late 2010, FRL had asked JohnEm Cruz to inaugurate a Steinway B piano at his home. Over dinner afterwards, Cruz and Lopez Group chairman emeritus Oscar M. Lopez (OML) talked about the possibility of building a concert hall in Rockwell.

“OML liked the idea and called us for a meeting with [Rockwell Land president] Tong Padilla the week after to present an idea which has evolved into what will be the Rockwell Proscenium. While waiting for the Proscenium plans to come to fruition, FRL and I often discussed FILharmoniKA and El Sistema,” Cruz said.

El Sistema, the youth music education program founded by Jose Antonio Abreu in Venezuela, became the inspiration for FPH and ABS-CBN’s own program called Sistema for the Filipino Youth (SFY).

“In our version, we invited indigent children of already existing ensembles to form the Orchestra of the Filipino Youth and be the model of future youth orchestras in the Philippines,” Cruz said.

As members of the OFY, the children receive free music education, including one-on-one lessons/music history/music theory and fundamentals/basic piano/basic conducting, rehearsal allowances, transportation assistance, meals, uniforms and instruments for their use in rehearsals and performances. For now, the OFY is based in Benpres Building in Ortigas.

Musical heavyweights such as current and former members of the PPO, including music director Olivier Ochanine; the Manila Symphony Orchestra; and of course, Cruz and their kapamilya in ABS-CBN P.O. serve as the children’s mentors.

According to the pianist, SFY-OFY is the bridge that prepares the OFY members to graduate to be members of the ABS-CBN P.O. or other professional orchestras.

“If they decide not to have a career in music, at least we were able to instill the discipline of music and possibly propagate social change,” he noted. 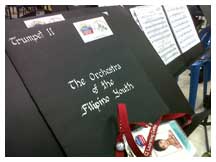 Open the OFY scores to enter a new world
If a recent incident was anything to go by, though, discipline and dedication are qualities that the youngsters of the OFY have in spades.

Cruz recalled: “There was a scheduled rehearsal during a major storm. The majority of the kids come from floodstricken areas. When many schools closed that day, we decided to push through with the rehearsal just to see how many would actually appear. That day, no one was absent, and many came soaking wet…, but all were seated, warming up their instruments. That day showed love and dedication for music!”

“Our stance is inclusivity rather than exclusivity, to become the orchestra for every Filipino, to serve and become a source of upliftment and inspiration. Everybody is in need of upliftment. The lower they are, the more they need to be inspired. That’s what we’re here for,” ABS-CBN P.O.’s Salonga stressed.

And as FRL put it, ABSCBN, through ABS-CBN P.O. and OFY, is “in the strongest position in the country to bring orchestral music into the hearts of the Filipino audience.”