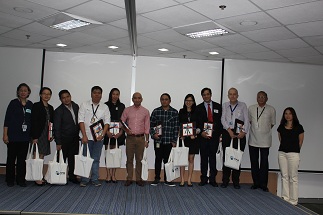 The presenters receive tokens of appreciation from Angela Lopez-Guingona, operations head of Lopez Group Foundation Inc. (rightmost); Benjamin Liboro, LAA director (2nd from right); and Elizabeth Canlas, LAA codirector (leftmost)For the first time since copping their Abueva-crafted trophies in October, the 12 winners in the 2014 Cycle Lopez Achievement Awards (LAA) were gathered together in one room. The occasion: the 3rd LAA Winners’ Summit held at the Ortigas headquarters of Energy Development Corporation (EDC) on January 27.

For Ernie Lopez, the summit was yet another instance of “cross posting,” where companies learn from each other and leverage each other’s strengths. He cited as examples the Lopez Group’s experience during typhoon Yolanda in 2013, when ABS-CBN collected relief goods which were distributed by First Philippine Holdings Corporation (FPH), First Gen and EDC; and when ABS-CBN talents helped FPH in building relationships with external groups.

The president of ABS-CBN Publishing Inc. thanked the LAA winners for their good work and willingness to share their “secrets” through the summit.

Kicking off the presentations were the winners in the Customer Focus category: First Balfour project director John Porter on Meeting a Critical Challenge: The 115-KV Burgos Overhead Transmission Line and Substation, and ABSCBNmobile Digital Access head Ralph Menorca on ABSCBNmobile and iWant TV: Shaping the Future of Content Creation and Customer Experience.

In HR Focus, the story behind Seven Unions Negotiating as One: The Unprecedented Unified CBA Story of EDC was discussed by senior manager for HR operations and administration Jose Noel Luna.

LAA codirector Beth Canlas introduced EDC and First Balfour, whose collaboration on the overhead transmission line and substation of the Burgos Wind Project merited the Special Recognition for Excellence in Synergy.

Nominate deserving teams LAA director Ben Liboro, in his closing message, encouraged employees to nominate deserving teams and individuals in the next cycle of the awards program. He also paid tribute to the LAA team composed of program manager Ross Hamo, Glenda Discutido, Karen Ventura and his codirector Canlas. Canlas bowed out of the Lopez Group after 41 years and three years with the LAA team.

The Winners’ Summit, which signaled the official close of the 2014 cycle, also saw the soft launch of the 2015 LAA cycle. 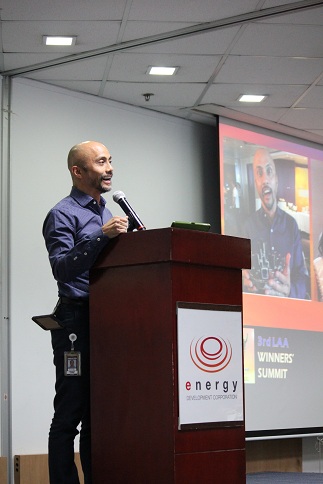 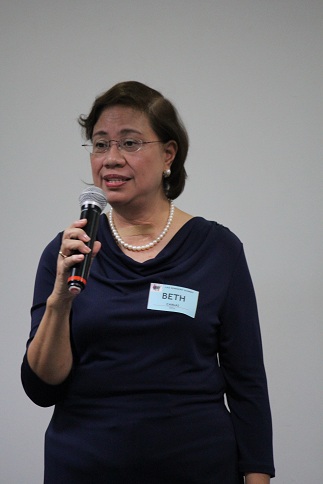 Canlas reviews the highlights of the 2014 cycle 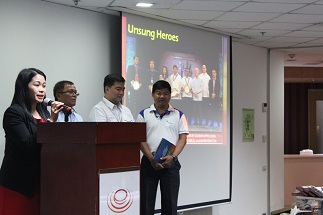 FPH’s Ria Silvino thanks the Lopez family, on behalf of her fellow Unsung Heroes, for the recognition given to them