Did you know: Remembering independence 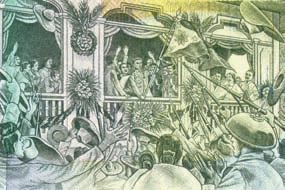 Did you know Remembering independenceEmilio Aguinaldo, the first president of the Philippines, on June 5, 1898 issued a decree to assign the day of the proclamation of independence: June 12.

Previous to this, Independence Day was, unofficially, on April 12, 1895. On this day, Andres Bonifacio had capped the initiation of new members of the Katipunan by writing “Viva la independencia Filipina!” on the wall of the cave in Montalban where the rite was held.

Despite Aguinaldo’s 1898 proclamation, the US in 1946 designated July 4 as the date of the Philippines’ independence. In 1964, or two years after Pres. Diosdado Macapagal issued a proclamation declaring June 12 as “a special public holiday… in commemoration of our people’s declaration of their inherent and inalienable right to freedom and independence,” Philippine Independence Day was finally observed on June 12. Meanwhile, July 4 became known as “Philippine Republic Day.”