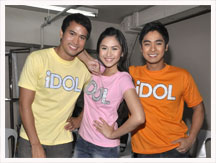 IDOL ABS-CBNOne-of-a-kind story. Newest team-up to be watched out for. Fresh talents with promising prowess. Veteran actors and comedians. Directors that has already set their mark in the industry. ABS-CBN has perfectly combined all these factors in one teleserye. “Idol”, the newest and coolest teleserye in primetime that will surely make your nights as spectacular as ever, starting September 6.

A series filled with hopes and dreams, Idol revolves around the story of a girl named Billie played by Sarah Geronimo who will reach the peak of stardom as a famous singer. However, because of a whopping family debt, she will be forced to set aside her fame while hiding her true identity and living a simple life as Jean. She will also be torn between two handsome hotties, Sam Milby as Vince and Martin as Lando, who will eventually fall in love with her.

After years of solely focusing on her singing career, Pop princess Sarah Geronimo ventures once again to acting as she is set to penetrate Kapamilya’s Primetime night teamed up with two of the sought after leading man, Acoustic heartthrob, Sam Milby and Prince of Indie films, Coco Martin. The oozing chemistry between the pairs is yet to be seen on screen which makes it more exciting. Not only will the three of them spice up the series but also fresh talents like Emmanuelle Vera and Pilipinas Got Talent grand winner, Jovit Baldovino will grace the said series.

Unlike what others seem to predict, Idol is not just any ordinary teleserye with singing actors and actresses. The series actually promotes our very own music as songs injected in the stories are all Original Pinoy Music.

Prepare for a melodious nights in ABS-CBN primetime as “Idol” hits the spotlight this September 6, directed by Ruel Bayani and Jojo Saguin after Noah. Also, catch the pilot episode in Studio 23 at 8:30 p.m. and in Cinema One at 9 p.m.