Award-winning 'The Kitchen Musical' on the Lifestyle Network 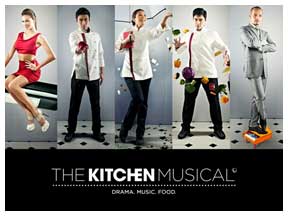 The Kitchen MusicalAfter having won the Gold Medal for Best Writing and Bronze Medal for Best Performance at the recently concluded 2012 New York Festivals and likewise bagging the InterMediaGold Globe Award at the World Media Festivals, The Kitchen Musical, an international production by The Group Entertainment that premiered on Lifestyle Network last May 2, is again nominated in the upcoming Festival de Television de Monte-Carlo which will be held on June 10-14 in Monaco.

This time, the series is nominated in three divisions in the Drama TV Series Category – Outstanding International Producer (The Group Entertainment’s Nelia Molato-Sutrisno, CheeK, Christopher James),Outstanding Actor (Stephen Rahman-Hughes and Filipino stage actor Arthur Acuña) and Outstanding Actress (ABS CBN’s very own Karylle Tatlonghari and Hong Kong actress/model, Rosemary Vandenbroucke).
"This is AWESOME! The Festival de Télévision de Monte-Carlo is a prestigious one with a long history of recognizing both artistic, cutting edge and commercially successful TV content. Just to be nominated in the category of Best Drama Series with the likes of Boardwalk Empire and Game of Thrones, some of the best drama series in the world, is an honor. This recognition will spur us on to make more creative content to increase the Happiness Quotient of both our viewers and investors," shared CheeK, creator of The Kitchen Musical, and the Head of Creative for The Group Entertainment.

As the lead actress, Karylle will be flying to Monaco this June to attend the festival for her prestigious nomination. She competes with big names such as Lena Headey and Emilia Clarke from Game of Thrones, Julianna Margulies from The Good Wife, Michelle Dockery and Joanne Froggatt from the award-winning British series Downtown Abbey and Kelly Macdonald and Gretchen Mol from Boardwalk Empire.

The Kitchen Musical is a genre-busting TV series featuring drama, music and food served in 13 one-hour 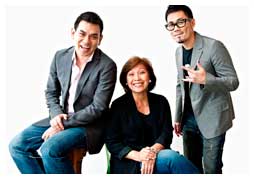 The Kitchen Musical Producers episodes. It is a story about Maddie (played by Karylle), a rich, young girl fresh out of culinary school who embarks on a journey of self-discovery when she starts working for The Avilon, her father’s restaurant. It has recently aired in 17 countries across Asia and local versions are currently in the works for Italy, India and Vietnam. For a bite of flavor-filled drama deliciously mixed with sizzling music and mouth-watering food, catch the series on the Lifestyle Network on Wednesdays, 10:00 p.m., Saturdays, 4:00 p.m., Sundays, 2:30 p.m., Thursdays, 1:00 a.m. and Fridays, 8:00 a.m.

From now until July, viewers can get a chance to win weekly gastronomazing prizes such as culinary short courses and The Kitchen Musical soundtrack albums simply by tuning in and answering the question of the week featured during the show. Apart from that, all participants stand a chance to win two major prizes—a 2-year culinary scholarship at the InstitutoCulinario.