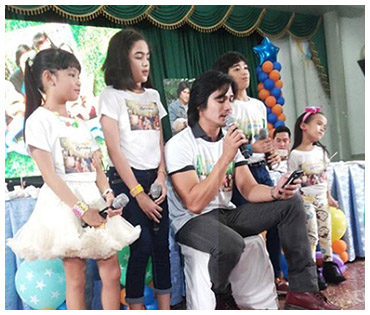 Xyriel Manabat, Andrea Brillantes, Piolo Pascual, Zaijian Jaranilla and Yesha Camile at the Hawak Kamay Family DayHow much can the life of a drunkard and aspiring musician change when he finds himself left with the responsibility of acting as a father to three adopted children?

This is what ABS-CBN’s newest family drama, “Hawak Kamay,” will be taking on as it hits TV screens to reach out to modern day Filipino families.

The series is set to take off with acclaimed actor Piolo Pascual at the helm, who will be making a much-anticipated return to television drama following the success of his movie “Starting Over Again” earlier this year. Piolo stars in “Hawak Kamay” along with three of the country’s most powerful child stars, Zaijan Jaranilla, Andrea Brillantes, and Xyriel Manabat. The series will also introduce Grand i-Shiner Yesha Camille, who was under the mentorship of Piolo during her stint in the second season of the Promil Pre-School i-Shine Talent Camp.

Taking on the role as a father in “Hawak Kamay,” Piolo has expressed the kind of connection he feels with the country’s young stars, especially being a single parent himself. “I like working with children because I kind of see myself in them,” he said in an interview with TV Patrol. 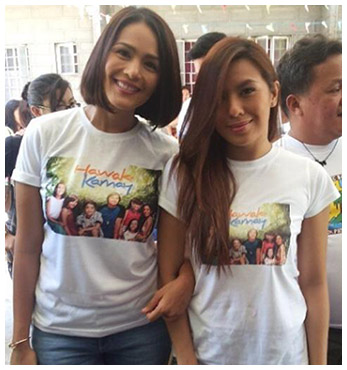 Iza Calzado and Nikki Gil at the Hawak Kamay Family Day
“Hawak Kamay” details the story of a beat down man named Gin (Piolo Pascual), who has dreams of making it big as a musician and is faced with various challenges that may make or break his belief in himself and in the value of the relationships. He begins the story by the side of the woman he loves, Me-ann (Nikki Gil), and is joined by three parentless children, Emong (Zaijan Jaranilla), Harriet (Xyriel Manabat), and Ningning (Yesha Camille). Their situation unfolds under the watchful eye of the estate executor, Atty. Bianca Magpantay (Iza Calzado).

As time passes and the situation grows deeper, Gin finds himself developing a different sort of attachment to the three children, and decides to get his act together for them.