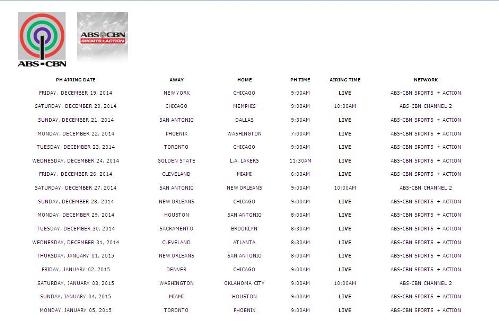 For 17 straight days, NBA fans will have the ultimate Christmas present as ABS-CBN Sports + Action airs a premier broadcast schedule of the NBA games starting this Friday (December 19).

From December 19 to January 5, NBA fans can watch for free on ABS-CBN Sports + Action and ABS-CBN Channel 2 their favorite NBA teams go head-to-head in an action-packed match on court.

Airing at 10AM on ABS-CBN Channel 2 on three consecutive Saturdays, the Chicago Bulls and Memphis Grizzlies will battle it out on December 20 followed by an intense match by the San Antonio Spurs and New Orleans Pelicans on December 27 and lastly, a highly anticipated game between the Washington Wizards and Oklahoma City Thunder on January 3, 2015.

On Christmas Eve (December 24), NBA fans can have their fill of an exciting match between the Golden State Warriors and the LA Lakers airing live at 11:30AM on ABS-CBN Sports + Action. A day after Christmas, ABS-CBN Sports + Action will be airing live another much-anticipated game at 6:00AM between the Cleveland Cavaliers and the Miami Heat, the first of four regular season meetings between the two teams. The December 26 (Friday)

ABS-CBN-SportsAction-logoCleveland-Miami match is also the first time that basketball superstar Lebron James is playing in the American Airlines Arena since leaving the Miami Heat this year.

NBA fans will also enjoy a back-to-back gift just in time for the New Year with the live telecast on ABS-CBN Sports + Action of the Cleveland Cavaliers and Atlanta Hawks showdown on December 31 (Wednesday) at 8:30AM followed by a live telecast of the match of the New Orleans Pelicans and San Antonio Spurs on January 1 (Thursday), 8:00AM – a great way to begin 2015.

Share your excitement as you watch the NBA holiday marathon by on social media by using the hashtag, #EverybodyUp, NBA’s tagline for this season.

Catch up on the NBA games airing on ABS-CBN Sports + Action through ABS-CBNmobile.