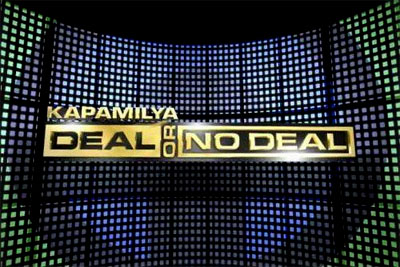 Kapamilya Deal or No DealWith just a text message, ABS-CBNmobile subscribers can now experience some of the exhilaration of Kapamilya, Deal Or No Deal and win exciting prizes.

The game show’s SMS promo will give away P300 worth of load and P10,000 cash in a daily raffle, while reserving the biggest bonanza in the grand raffle where the winner gets a house and lot from Lumina Homes.

No longer is the excitement limited to the studio contestants of Kapamilya, Deal Or No Deal, the biggest game show franchise in the country. Anyone with an ABS-CBNmobile SIM can join in the fun.

The promo, which will last from April 6 to May 28, 2015, is open to all ABS-CBNmobile Prepaid subscribers, who must register for the Kapamilya, Deal Or No Deal SMS promo.

Registration is simple. The subscriber, who must be at least 18 years old, just needs to do the following:

Registered subscribers can now earn entries by downloading ABS-CBN trivia and guessing the briefcase containing P1. They must have regular load to do this since the free SMS that go with the newly activated SIM cards are not valid for use in the promo. Sending entries is done by texting the following to 2131:

Subscribers will then receive ABS-CBN trivia along with the confirmation for sending a valid entry. A maximum of 30 downloads of trivia, equivalent to one entry each, are allowed per day per SIM card. Entries must be sent between 4:30pm to 11:59pm, from Monday to Friday, April 6 to May 28, 2015.

All valid entries during the promo period will then be included in the grand draw for a brand new house and lot from Lumina Homes.

So register and join in the excitement now by sending your entries or getting your ABS-CBNmobile Prepaid SIM cards.

For more additional details about the promo and info about ABS-CBNmobile, please go to www.abscbnmobile.com.(Story/photos by Anthony Alcantara)