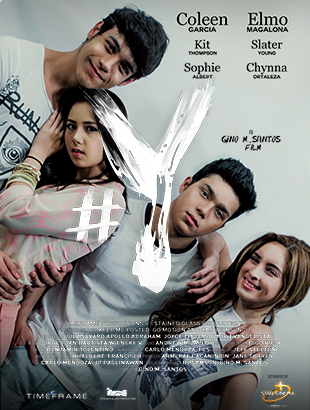 The 2014 indie film revolves around Miles (Elmo Magalona), a college student who suffers from depression. On the night of his planned suicide, Miles’ plan is rendered useless when his friend calls him to talk about her latest liberating adventure. As Miles tries to put the pieces of his life back together, viewers will get to know what goes on in Miles’ mind and in the mind of his co-millennial friends.

The movie, which was Santos’ entry to the New Breed category of Cinemalaya in 2014, bagged the special citation for Ensemble Acting. “#Y” also received good reviews, with Rappler describing it as, “an accurate representation of the millennial generation and a film steeped in hashtags, social media, casual sex, drugs, crises of identity, and blatant narcissism.”

The cast of “#Y” also harvested praises from various critics. In a review by Lifestylehub, it praised the performances of Kit Thompson, Coleen Garcia, and Sophie Albert who displayed remarkable acting, while Chynna Ortaleza was described as the cut above the rest because she gave justice to her role.

“#Y” premieres on October 11, at 8PM in Cinema One’s Blockbuster Sunday with an encore telecast on October 17, 9PM. (Story/photo by Katherine Solis)