Ritz to star with Paulo, Ejay in new series 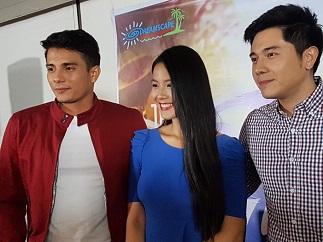 ej paulo ritzRitz Azul has bagged a starring role in the upcoming series “The Promise of Forever” with Paulo Avelino and Ejay Falcon.

Azul, who was part of FHM Philippines’ list of the 100 Sexiest Women in the Country from 2013 to 2015, made her Kapamilya debut with a guest stint on “Ang Probinsyano,” which is also under Dreamscape.

She also revealed that some scenes will be shot on a cruise ship. “The Promise of Forever” will be helmed by “Nathaniel” director Darnel Villaflor and independent filmmaker Hannah Espia of “Transit” fame.

The directors said the story of “The Promise of Forever” will try to prove love is “beyond forever.” “Hindi siya mabigat pero romantic,” Villaflor said.

Further details about the series have yet to be announced. (Excerpted from news.abs-cbn.com)