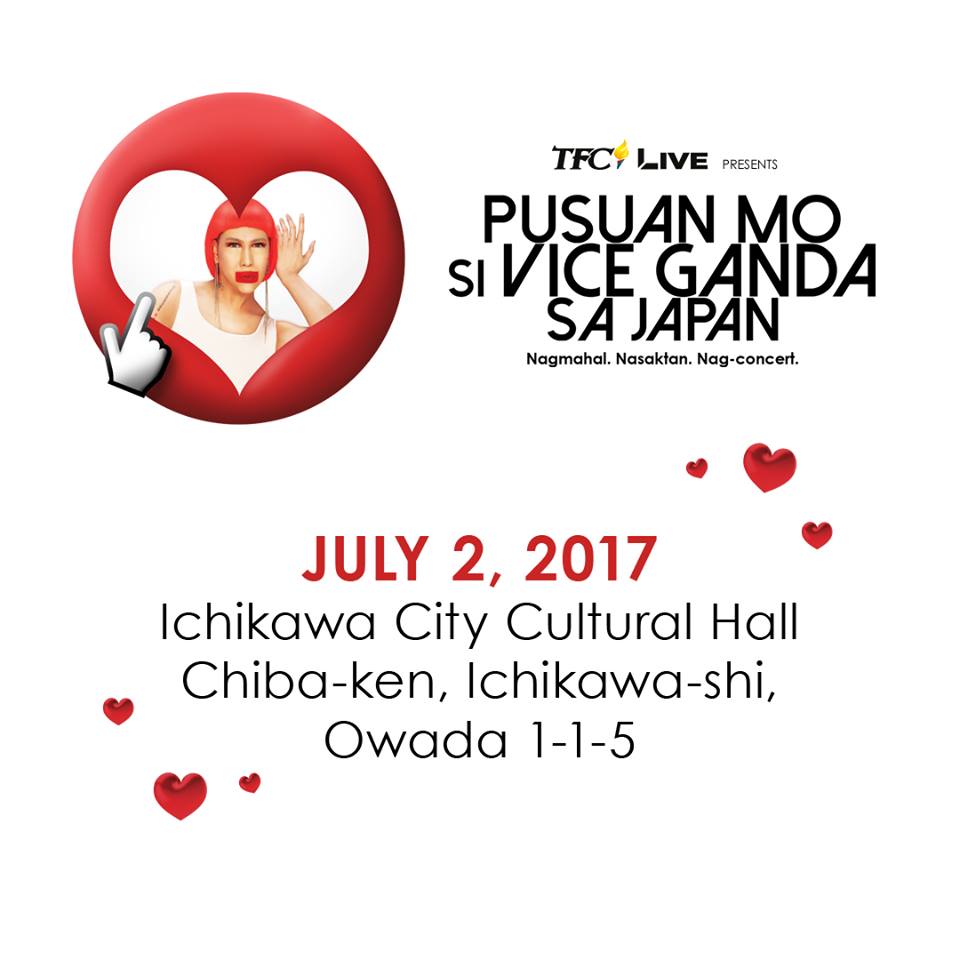 June 30, 2017 (Japan) – As part of its continuing celebration of its 10th anniversary in Japan The Filipino Channel (TFC) Japan will fly the Unkabogable Star Vice Ganda to the Chiba prefecture this weekend to stage the second international leg of the blockbuster concert series “Pusuan Mo si Vice Ganda sa Japan: Nagmahal. Nasaktan. Nag-concert” on July 2 at the Ichikawa City Cultural Hall.

“Pusuan Mo si Vice Ganda sa Japan” is the second international leg of the Phenomenal Star Vice Ganda’s most recent concert series, the first of which is the highly successful leg in the U.S. last April.

Aside from giving everyone a hearty laugh and good vibes, Vice Ganda will also surprise the audience with performances that will prove that aside from being a comedian with a perfect timing, he is also a well-rounded performer.

Providing another milestone performance is “Tawag ng Tanghalan” sa “It’s Showtime” first adult grand winner Noven Belleza. “Pusuan Mo Si Vice Ganda” will be Belleza’s first major performance outside the country after his epic win last May in the iconic competition which was revived by the top-rating variety show.

Aside from the all-out performances, TFC Japan will make the concert experience more memorable with the launch of the TFC Live App. By downloading the application and joining the “Pusuan Quiz”, interested parties get the chance to either win a backstage duet with Belleza, take home merchandise autographed by Vice Ganda, or win exclusive TFC collectible items.

“Pusuan Mo si Vice Ganda sa Japan” is part of the “It’s Showtime” host’s growing list of successful concerts that have been staged both locally and internationally, the last one being the 2015 concert “Vice Gandang Ganda sa Sarili”.  The next “Pusuan Mo Si Vice Ganda” happens in South Korea in August and Australia in October.

So, let TFC continue the celebrations and Vice Ganda spread the good vibes via “Pusuan Mo si Vice Ganda sa Japan” concert on July 2 at the Ichikawa City Cultural Hall, Chiba Prefecture.
For more updates about the show, visit and like facebook.com/TFCJapan. Connect with fellow global Kapamilyas and follow @KapamilyaTFC on Twitter and Instagram.