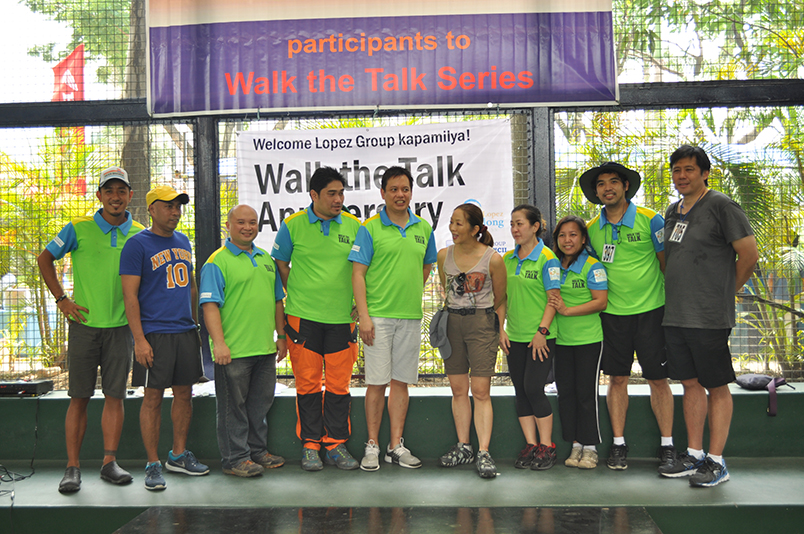 HR Council head Cedie Lopez Vargas (6th from left) and FPIP president Edwin CoSeteng (rightmost) with the WTT committeeBlessed with good weather in the midst of the rainy season, a huge throng of around 600 consisting of Lopez Group employees, family members and friends displayed their all-out support for the walking advocacy of Oscar M. Lopez (OML) to celebrate the eighth anniversary of the Walk the Talk (WTT) series at the First Philippine Industrial Park (FPIP) compound in Sto. Tomas, Batangas on October 4.

Registration started around 6 a.m. as the number of participants continued to mushroom as time ticked by. Each registrant was provided with a portable raincoat, while taho vendors were already stationed to cater to the early patrons.

After the invocation by Amurao and the flag ceremony, FPIP’s VP for Corporate Services Jun Lizardo led all participants in the recitation of the Lopez Credo and Values. Welcome remarks were provided by FPIP president Edwin CoSeteng and HR Council head Cedie Lopez Vargas.

OML, chairman emeritus of the Lopez Group, drew the loudest cheers as he took to the stage and delivered his inspirational speech. He gamely announced that if he could join each WTT event for at least 10 more years, he would definitely do it.

Before trudging more than six kilometers of well-paved concrete, the participants were once again “treated “ to the traditional stretching and exercise portion led by Trini Trinidad of Whiplash and “Miss Saigon,” and the Rockwell Club, to jumpstart them for the long walk ahead. 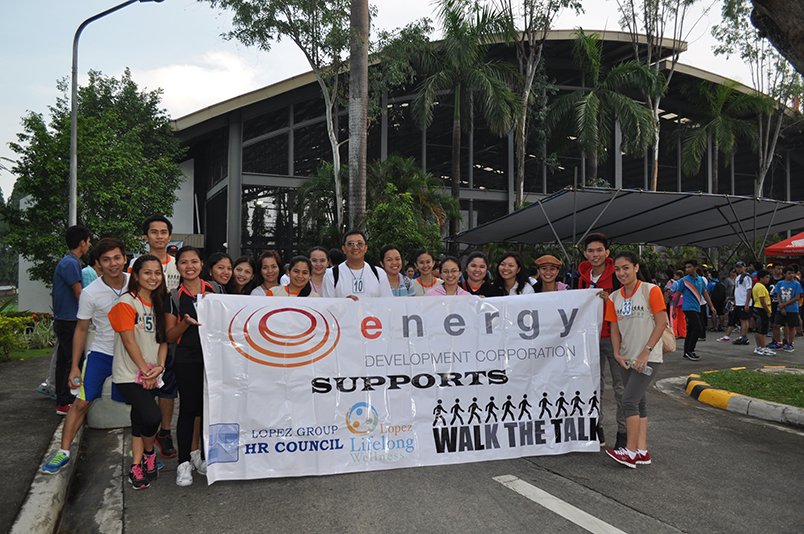 The EDC team is ready to conquer the parkDuring the walk proper, the participants saw the new developments and structures inside the compound, which incidentally were not yet up during last season’s WTT anniversary held at the same venue. Other features that were offered by host FPIP was a tree-planting activity along the route coupled with fresh buko refreshments.

As the walkers arrived at the finish line, they were treated to a hearty Japanese meal as well as an entertainment number from “It’s Showtime” “Kalokalikes” Raymond John “Bamboo” Alternado and Santie Felix “Coco Martin” Celso courtesy of ABS-CBN.

To further highlight the anniversary, as always, company and individual awardees of the WTT were given recognition.

Awarded were those who earned perfect attendance for both individual and company categories as well as companies that consistently had the biggest number of contingents. 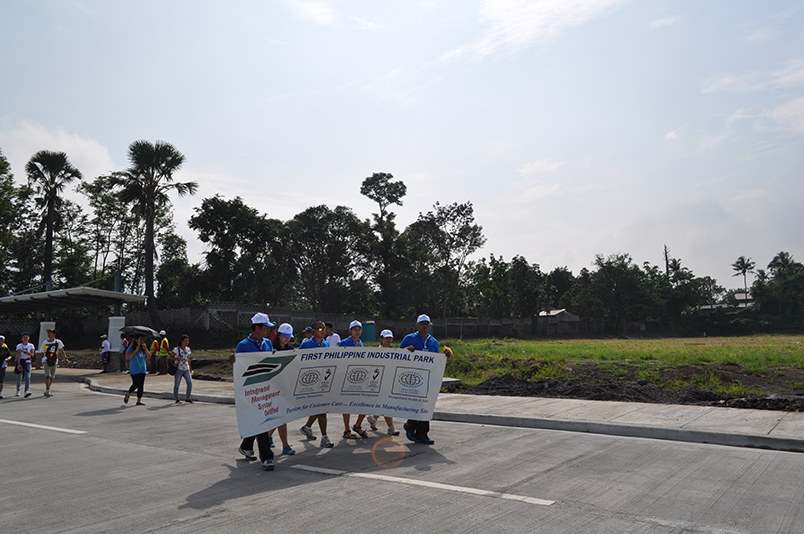 Holding high the FPIP bannerJust like any other WTT anniversary, prizes were raffled off, ranging from Baron antennas, travel organizers and thermos bottles to an Orbitrac Chair exercise machine, Samsung DVD player and a Samsung Series 6 32” LED TV, Shimano bicycles and a 2,500-watt generator.

As the event closed its curtains, regardless of whether someone won a prize or left empty-handed, the loads of priceless smiles generated by this momentous event just depicts how valuable a WTT event really is: a venue for camaraderie, family bonding and wellness rolled into one!  (By Gerbs De Castro) 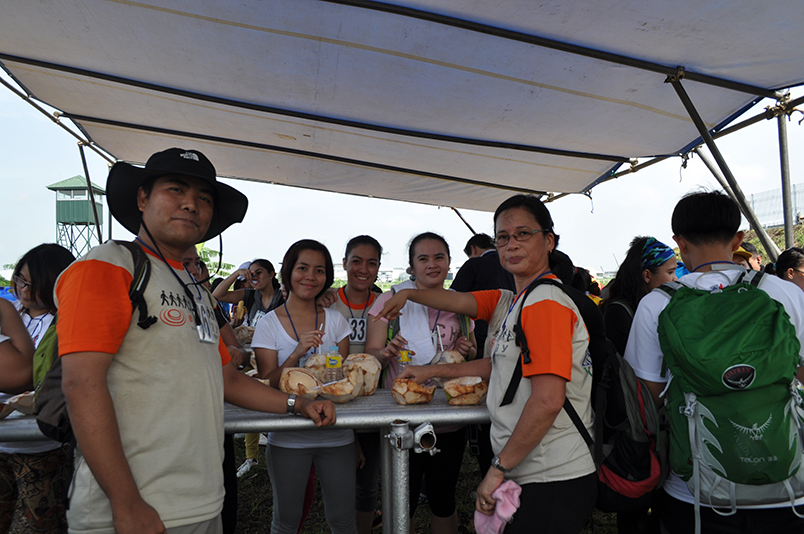 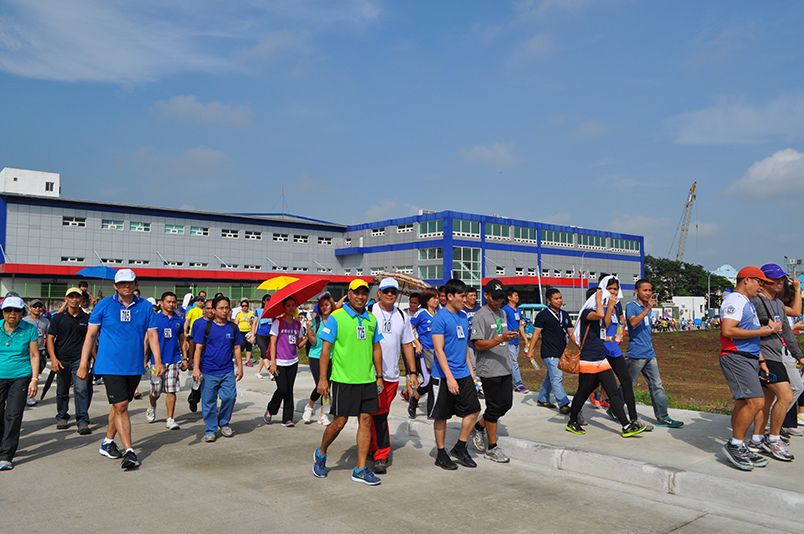 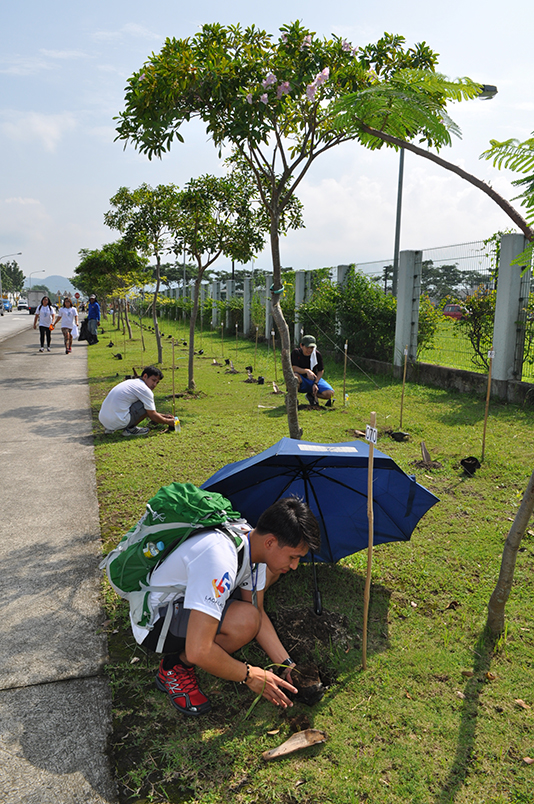