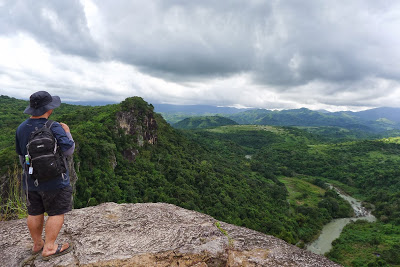 The author enjoys the view from the summit of Mt. ManalmonWhile on Pinoymountaineer. com, my mountain reference site, I scoured the website for mountains that cater to nonadvanced trekkers. I chose Mt. Manalmon in San Miguel, Bulacan.

According to the site, trek time duration to the summit of Mt. Manalmon takes an hour. On a scale of 1 to 9, this target destination has a difficulty of only 2. Trail class is 1-2 out of a high of 5.

Class 1 means you are on a well-established trail the entire time. No route-finding skills are needed and the trail is usually well-signed so it’s damn near impossible to get lost.

Class 2 is defined as hiking that could require some routefinding skills and may take you over boulder fields or loose rock slopes. There is a chance you will need to use your hands for balance.

Our group met up at the Five Star Bus terminal along EDSA Cubao and rode a Cabanatuan-bound bus at 5:45 a.m. We alighted in Brgy. Kamias in San Miguel, Bulacan and rode tricycles to the jump-off near Mt. Manalmon.

At the jump-off, we took photos near the Madlum River. The waters were not too clear due to a downpour the previous day.

We crossed to the other side of the river via a balsa (raft) to pay the registration fee and to discuss with the Madlum guide the sites that we preferred to explore.

We then went back to the jump-off (another balsa ride) and began our “easy” trek around 9:30 a.m.

One major thing we failed to realize was that despite the good weather on the day of our trek, it had rained hard the previous night. Therefore, most of the trail was very muddy.

The initial parts of the trail were steep uphills and downhills. After 15 minutes of these “obstacles,” we rested under a mango tree.

We rested anew after 30 minutes at a rocky stream to refresh ourselves for the final ascent.

Finally, after a 1.5-hour trek which should have been less than an hour, we conquered Mt. Manalmon.

At 160 meters above sea level, with Mt. Gola and Madlum River in the distance, the view was breathtaking!

We started trekking down at 12:30 p.m. After an hour, we arrived at the jump-off. After filling up our stomachs at a nearby carinderia, we rode a balsa from the jump-off going to the other side as the next part of the trek would be the Madlum Cave exploration. 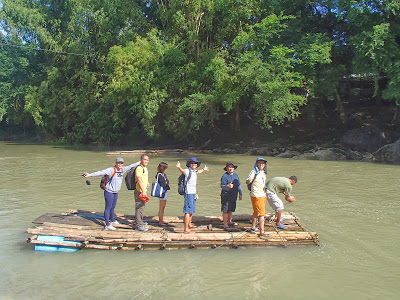 Visitors are in for several balsa ridesThe Madlum Cave is a prominent feature of the Angat limestone formation which occupies most of the Biak-na-Bato National Park. It is considered a shrine by the people of San Miguel.

It started to rain while the group was inside the cave.

The residents warned that if the waters continued to rise, we would be forced to use the Monkey Bridge high above Madlum River—which has no harness— because the balsa was unable to go through raging waters. We quickly decided to leave the registration area via the balsa.

Due to the bad weather, we had to cross a concrete bridge with nothing to hold on to in order to reach the area where the tricycles were parked. Sounds so easy, but when the water overflows, the bridge “vanishes” from sight; thus, we could only walk across by feeling the bridge with our feet.

The trek to Mt. Manalmon could have been a lot easier had it not been for the muddy trails. But after that kind of torture, it was more rewarding for a group expecting a Level 2 mountain for the trek to be a lot more than that.

For those who want to experience a beginner-level mountain, Mt. Manalmon is definitely a recommended place. Just make sure it did not rain the previous day! (Excerpted from http://largabista. blogspot.com)