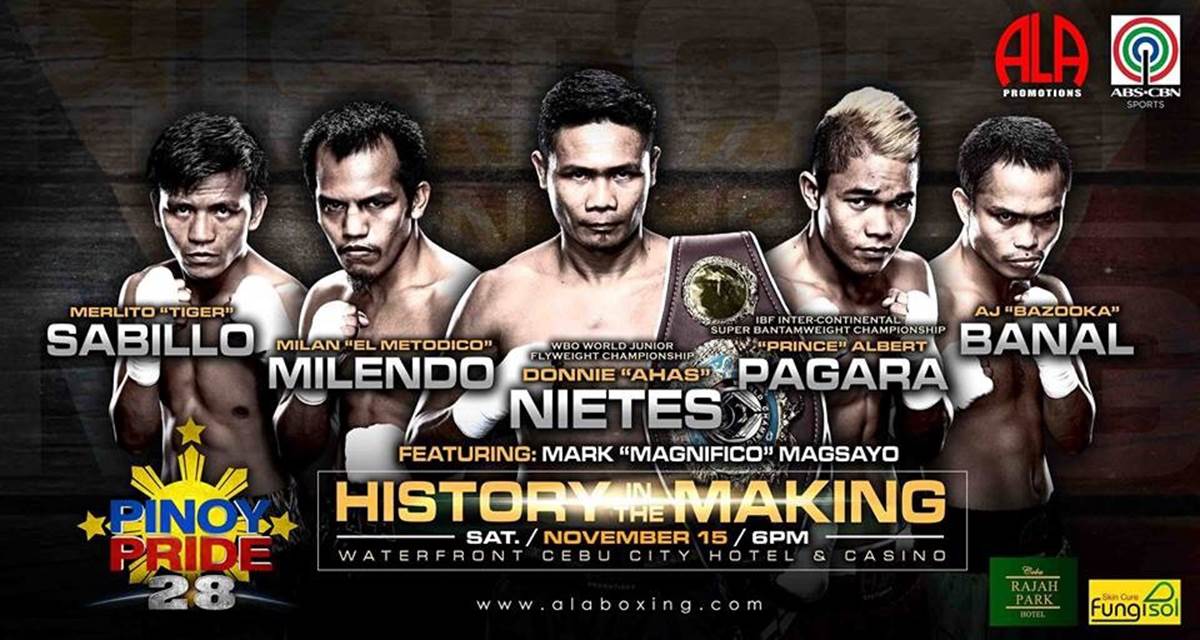 Another highlight of Pinoy Pride 28’s fight card is “Prince” Albert Pagara’s match against Mexico’s Raul Hirales. A win by Pagara will ensure his continued reign as the IBF Intercontinental Super Bantamweight Champion.

For Filipino Boxing Stars Merlito “Tiger” Sabillo, Milan “El Metodico” Melindo, and A.J. “Bazooka” Banal, winning becomes their sole imperative – as they need to prove to the world that they have what it takes to become world title contenders once again. Banal will face Thailand’s Maxsaisai Sithsaithong. Sabillo will battle it out with Indonesia’s Farris Nenggo. As for Melindo, he’ll have an IBF Flyweight Eliminator match against Mexico’s Saul Juarez.

Watch the best Filipino fighters defend their championship titles on Saturday, November 15, 2014, live and commercial-free on SKY PAY-PER-VIEW (PPV), available on SKYcable and Destiny Cable. Witness the birth of new boxing legends in almost real life, exciting action in HD or Standard Definition for only P199.  Subscribers who already purchased access to the Pacquiao-Algieri PPV can watch Pinoy Pride 28 for only P149.

SKY continues to offer viewers with diverse options to enjoy TV entertainment with its value and premium service offerings. With SKY PAY-PER-VIEW, SKYcable and Destiny Cable let you and your family enjoy real-time exclusive coverage of sporting events, TV specials, and live concerts right at the comforts of your home. SKY PAY-PER-VIEW is offered exclusively to all digital subscribers of SKYcable nationwide and of Destiny Cable in Metro Manila.