The FPH story continues in ‘The Audacity DNA’ 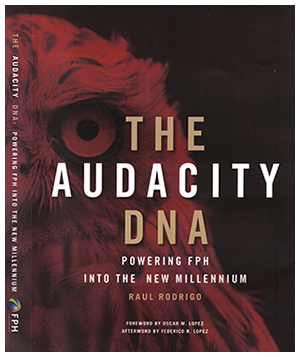 The new book was launched during FPH’s 53rd anniversary celebration at the Lopez Museum.

The Audacity DNA turns the spotlight on the third-generation FPH leaders and how they steered the company’s ventures in power generation. It follows The Cornerstone, published in 1992, and The Firebringer: Forty Years of First Philippine Holdings, published in 2001.

In his foreword to the book, FPH chairman emeritus Oscar M. Lopez (OML) retraced the beginnings and brisk growth of FPH, and how the company, together with other Lopez businesses, were eventually seized when then Pres. Marcos placed the country under martial law.

Reclaiming FPH
Beginning in 1986, the Lopezes and their associates toiled to reclaim and rebuild FPH, Meralco and ABS-CBN, as well as to diversify into new ventures in light of the opportunities offered by the times. “…We returned to our companies and found them either shut down or close to collapse. We painstakingly revived and nursed them back to health with the meager resources that were available to us. Then we built them into even larger and more successful companies than they had been prior to martial law,” OML recalled.

He credited his father, Lopez Group founder Eugenio Lopez Sr., for preparing the family for these challenges with “a business philosophy, a business purpose, a set of values and a way of regarding, treating and respecting our co-workers and employees that have served us well and that have never failed us.”

Valuable lessons
For his part, FPH chairman Federico R. Lopez (FRL) noted during the book launching that his 25 years with the company offered lessons “too valuable to be left lingering in our busy and oftentimes preoccupied minds.”

“That’s why I’m so glad that our chairman emeritus had the foresight to commission Raul Rodrigo on yet another book on FPH’s history…. Many of us still get goose bumps reading and reexperiencing it all.”

FRL praised Rodrigo, who passed away in 2012, for capturing the drama behind events in FPH’s story in his trademark brilliant and classic style.

He also expressed the hope that FPH’s 53rd anniversary celebration would be a reminder of the company’s journey and its people who make it what it is.

“FPH is what our chairman emeritus calls a ‘living company’ because it breathes, it laughs, it cries, and most especially because it remembers and learns from its past. That has been our strength at FPH and why those enduring values that have always mattered to us will also be the same ones that will continue to guide us well into the future,” the chairman said.

FPH employees each received a copy of The Audacity DNA after the event.