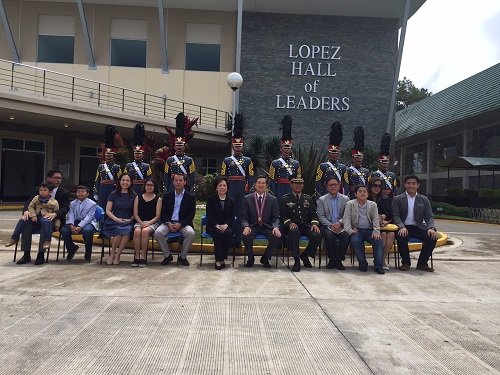 Amb. Manuel M. Lopez and family in front of the Lopez Hall of Leaders

Lopez added: “His (AMML’s) leadership, dedication and commitment to serve contributed to the strong partnership not only between JNDA and the PMA, in particular, but also Japan and the Philippines, in general.”

AMML is the country’s ambassador extraordinary and plenipotentiary to Japan. The recognition given to him was witnessed by his wife, Maritess, and other members of the family, including Lopez Group chairman emeritus Oscar M. Lopez.

In his message to the cadets, the ambassador encouraged them to remain idealistic and to look after the welfare of fellow Filipinos.

“Let us work for fairness and equity in the distribution of the many opportunities and rich resources of our country. We must not only support enlightened leaders but be enlightened leaders ourselves, making the tools of progress, such as education, health services and, most of all, safety and security within our shores, accessible to most, if not all,” AMML said.

In 2008, the Lopez Group donated to the PMA a multipurpose building, now called the Lopez Hall of Leaders. (Story/Photo by: Carla Paras-Sison)