ABS-CBN is Filipinos’ network of choice in March 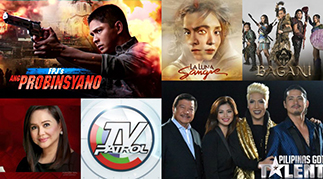 ABS-CBN ProgramsABS-CBN remained as the top TV network in the country in March as it swept the top 10 list of most watched programs and recorded an average audience share of 46% (excluding Holy Week) compared to GMA’s 32%, according to data from Kantar Media.

“FPJ’s Ang Probinsyano” (41.3%) solidified its position as the most watched program in the country in March, followed by “Pilipinas Got Talent” (38.1%). “La Luna Sangre” (37.2%) thrilled viewers up to its gripping finale, while “Bagani” (33.4%) instantly fascinated viewers.

ABS-CBN won across all time blocks, particularly in the prime time block where it garnered an average audience share of 51%, 21 points higher than GMA’s 30%. (Story/Photos by: Kane Choa)