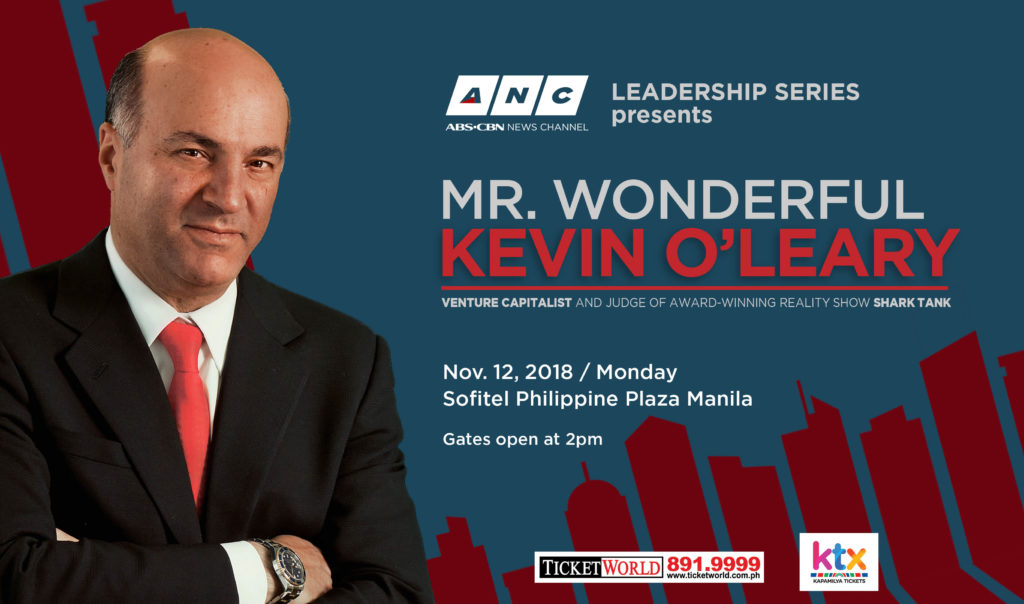 ANC Leadership Forum with Kevin O LearyVenture capitalist and entrepreneur Kevin O’Leary, known as “Mr. Wonderful” in the business-themed program “Shark Tank,” will be coming to Manila for the ANC Leadership Series at the Sofitel Philippine Plaza Manila on November 12.

The billionaire business magnate is expected to bring his business smarts and signature no-nonsense approach to mentorship to the event produced by ABS-CBN News Channel (ANC).

The founder of the O’Leary Financial Group will share how he became a successful entrepreneur, how he developed an expertise in financial management, and explain the “O’Leary Way” of aggressively grabbing opportunities in business.

O’Leary became a household name as one of the “sharks” or investors in ABC’s “Shark Tank,” a critically-acclaimed reality show that has helped reinvigorate entrepreneurship in America. The program features aspiring entrepreneurs who pitch and defend their business ideas to a panel of investors, including O’Leary, in the hopes of getting funding from them.

Before “Mr. Wonderful,” ANC also brought to the Philippines Virgin Group founder Richard Branson, former US Secretary of State Madeleine Albright, sports and entertainment mogul Peter Guber and leadership guru Stephen M.R. Covey for the ANC Leadership Series, which is part of the country’s premier all-English cable news channel’s efforts to raise the level of discourse on global affairs and business issues in the country.

The ANC Leadership Series, moderated by ANC anchor Cathy Yang, will be held on November 12, 2 p.m., at the Sofitel Philippine Plaza Manila. For inquiries and reservations, visit www.ktx.com.ph or call TicketWorld at 891-9999 or log on to ticketworld.com.ph.