11.20.11 Run for the Pasig River: Making another run at world record 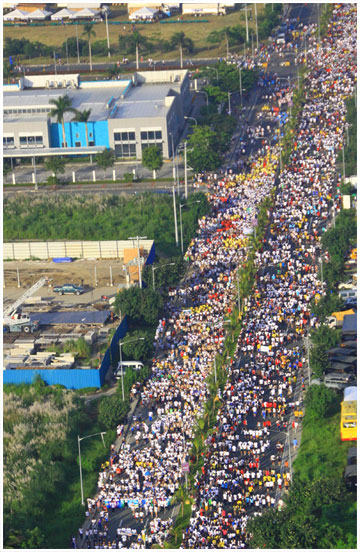 Run For Pasig 10.10.10“I am part of a Guinness World Record.” This slogan can be spotted emblazoned on a line of T-shirts sold at select SM branches, one of the special merchandise released in advance of 11.20.2011 Run for the Pasig River organized by Kapit Bisig Para sa Ilog Pasig (KBPIP).

The previous edition of the annual advocacy fun run, held on October 10, 2010, was indeed one for the record books: 116,086 participants ran in support of KBPIP’s goal of a clean Pasig River from various points in the metro and converged at the SM Mall of Asia in Pasay. As it was, 10.10.10 was a quantum leap from A Run for the Pasig River’s 23,000 runners in 2009.

But with ABS-CBN Foundation Inc. (AFI) managing director Gina Lopez (GL) vowing during 10.10.10 that “every year we will break the record, we will keep running until the river is cleaned,” Lopez Group kapamilyas are in for a more massive run three weeks from now.

According to AFI’s chief strategist, Monchet Olives, 11.20.2011 is on track to top the previous run in terms of number of participants, with 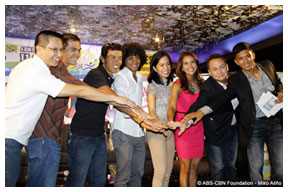 Run For Pasig Overall Race directors the count at 117,000 thus far. ABS-CBN is good for 5,000 runners, while the Lopez Group is expected to field another 5,000, he added.

Students normally make up the bulk of the runners, alongside delegations from private companies, the military and the police.

Olives also estimated that revenues from registration fees and ads will improve on the P12 million raised during the 10.10.10 run. Even nonrunners will still be able to do their share by purchasing Run for the Pasig River limited edition shirts, caps and visors at SM Mall of Asia, SM North EDSA, SM Megamall and The ABS-CBN Store at the ELJ Building. 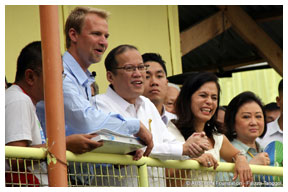 Gina Lopez with President Noynoy Aquino and Nedy Tantoco“Last year we had a crowd estimate of easily around 150,000 people,” GL had noted in an earlier interview. “We just weren’t able to count everyone properly because we used the manual count.”

The trio of race directors who directed last year’s fun run—Eric Imperio, Thumbie Remigio and Rio dela Cruz— have returned to take charge of the 11.20.2011 Run for the Pasig River, along with newcomer PJ Villarta.

Source of funds
More than earning genuine bragging rights for being part of a Guinness-worthy feat, those who take part in the annual runs are also contributing to the major source of funds for KBPIP’s seven-year plan to clean the 27- kilometer Pasig River.

The river, which was declared biologically dead about two decades ago, cuts through Metro Manila and connects Laguna de Bay to Manila Bay by way of the Napindan Channel, a major tributary. KBPIP aims to clean, by clusters, all 47 tributaries, esteros and creeks that feed into the river.

The AFI headquarters in front of the Pinoy Big Brother house is probably the closest thing to a war room for the campaign, a place where

The River Warriors good and noble deeds have been hatched since 2009 when AFI and the Pasig River Rehabilitation Commission (PRRC) got together to form KBPIP. In her second-floor office, GL, who also heads PRRC, shows a series of PowerPoint presentations tracking the transformation of parts of the Pasig River from trash pit to eye- and nosepleasing pockets of green.

The funds raised from the 2009 run, which were matched by a P30-million contribution from the Office of the President, were poured into the initial rehabilitation of KBPIP’s first target: the 2.9-kilometer Estero de Paco and its immediate surroundings, including the Paco Market.

A 60-second “before” and “after” clip briskly summarizes the work done by KBPIP on the estero in 12 months. After the relocation of thousands of informal settlers, several cleanups were carried out by multi-sectoral groups and the River Warriors community volunteers. They were able to rid the estero of about 3,200 cubic meters of sludge and solid waste.

The estero was also dredged, coco fiber technology applied as a stabilization and filtration system, and island reactors put up for aeration to 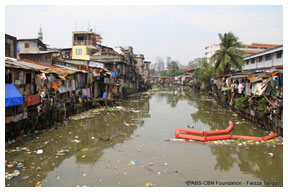 KBPIP’s experience in Paco comes in handy as it prepares to launch into the next esteros on its list. Estero de San Miguel has been described as “one of the biggest slums in the world.” It is a bit shorter than Estero de Paco at two kilometers, but its pre-rehabilitation state is no less dismal. 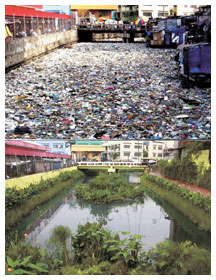 Before and after of Estero de PacoOlives, a 25-year veteran of ABS-CBN, appreciates the sheer magnitude of the job he signed on for a couple of years ago. “Managing La Mesa is huge, so imagine cleaning a river,” he noted, referring to AFI’s successful rehabilitation and protection of La Mesa Watershed and Eco Park in Quezon City.

GL, two years from the formation of KBPIP, remains gung-ho and optimistic about the campaign—one of several she, characteristically, has on her plate.

For one, the current administration is also helping in a big way, earmarking a budget of P10 billion a year to clean the country’s waterways. This, coupled with KBPIP’s six-year game plan, GL said, means “the river really might get clean!”

Pointing out the mass support the Pasig River cleanup drive has garnered, she added: “What moves this country is people power. Nothing can stand in the way of a people united for a noble cause.”