Adtel: Leadaing the charge into solar energy in the Philippines 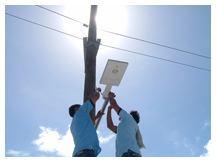 A pastor said he was able to read the bible at home even after sundown. A woman cried tears of joy. A man, presented with the prospect of charging his cellphone without having to trek to the town center, eagerly whipped out his unit—an iPhone. Different folks, different priorities and needs, but all of them expressed gratitude for having electricity in their homes for the first time.

These were some of the reactions that Advanced Telecommunications (Adtel) Inc. president Reynaldo Casas saw in the Philippine hinterlands during the distribution and installation of the company’s newest product, the Adtel Home Solar Kit. A compact system that harnesses the power of the sun to bring electric light—and other omnipresent comforts and conveniences that city folk take for granted—to places beyond the reach or inclination of electric cooperatives, the Adtel Home Solar Kit will hopefully become the 16-year-old company’s next breakthrough product.

Adtel is the company behind the Baron aerial TV antenna. In December 2009, Casas said, the company reached a milestone, selling 1 million units of the antenna with the help of its network of resellers and of course, its endorser, the late ABS-CBN weatherman Ernie Baron.

This time, however, Adtel’s end goal goes beyond moving x number of Home Solar Kits, garnering recall or hitting financial targets. It’s about using its resources and assets to give back and serve an overlooked sector of Philippine society.

2008, when Republic Act No. 9513, or the Renewable Energy Act of 2008, was signed by the President. It states, among others, that the government must “accelerate the exploration and development of renewable energy resources such as…biomass, solar, wind, hydro, geothermal and ocean energy sources…to achieve energy self-reliance, through the adoption of sustainable energy development strategies to reduce the country’s dependence on fossil fuels….”

In addition, the government is mandated to “increase the utilization of renewable energy by institutionalizing the development of national and local capabilities in the use of renewable energy systems, and promoting its efficient and cost-effective commercial application….” Thus, with Energy Development Corporation (EDC) carving out a niche as the country’s leading geothermal energy company, Adtel staked its claim on solar energy. Things fell into place when the company decided on its target market for its Home Solar Kits. To carry out this vision, Adtel hired an executive from the Department of Agrarian Reform (DAR), Raymond Oliver S. Batara. Over the second half of 2009, Batara was able to lay the foundation of the solar business by establishing five pilot sites with a total of 14 beneficiaries as proof of concept. The sites are in Caba in La Union, Calauan in Laguna, Jose Panganiban-Camarines Norte in Bicol, Tacloban in Leyte and Davao del Norte in Mindanao. All the five pilot sites were coursed through the town mayors, electric cooperatives or microfinancers.

According to Japs Batara, head of Adtel’s Solar Energy Department, National Statistics Office (NSO) data indicate that there were 3.3 million un-energized households in the Philippines as of 2002. Of this number, 2.8M (35%) are concentrated in rural areas as opposed to only 7.9M or 6.9% in urban areas. In terms of region, the Autonomous Region in Muslim Mindanao (ARMM), Western Mindanao, and Eastern Visayas lead the pack with 55%, 44.6%, and 36% of total households without electricity. Surprisingly, Batara added, figures obtained from the National Electrification Administration (NEA) show that the number of un-energized households had increased to 3.4M by April 2009, with the bulk (1.5M or 46%) still coming from Mindanao.

These marginalized households comprise Adtel’s target market, in line with its thrust to make corporate social responsibility (CSR) an integral part of its vision and mission. 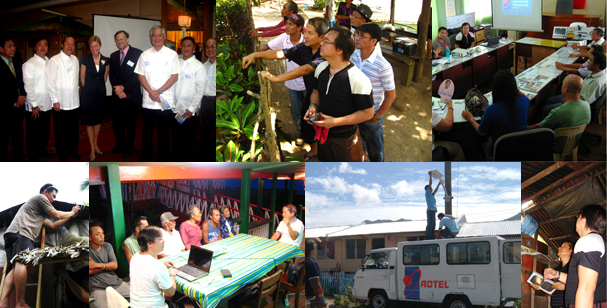 “One of our priorities is to alleviate poverty through solar electrification,” said Batara, a recruit from the Department of Agrarian Reform (DAR) who joined the company in June 2009. “The members of the marginalized sector have been deprived of basic services like lighting, access to communication and entertainment. This is the reason we have embedded CSR in our vision-mission.”

According to Batara, the Philippines’ being an island country exacerbates problems with accessibility, communication and distribution. Building infrastructure to boost power generation and distribution requires a long lead time; meanwhile, electric cooperatives tasked to do the job grapple with damage to their facilities due to weather disturbances, the high cost of maintenance, and even theft.

“Extending the grid or the wire through the islands is really costly, so electrification is concentrated only in franchise areas or clusters. No one is really thinking of the off-grid because of the huge investment that is needed,” Batara explained.

Thus, Adtel aims to work with the government and private sectors to distribute its solar power systems and devices throughout the country.

The Adtel Home Solar Kit includes a laptop-sized solar panel and a battery; a charge controller determines whether the battery is full, after which it automatically cuts off the electricity from the panel. The kit’s new-generation LED (light emitting diode) lamp answers the need for lighting, while provisions for an AM/FM radio answer the residents’ need for education and entertainment.

“We have included a cellphone charger because most of them use cellphones for communication. The system that we have designed already takes care of the education and entertainment through the radio, and communication through the cellphone chargers,” noted Batara. In addition, being a stand-alone system, the Adtel Home Solar Kit does not rely on a communal network. “Mawalan man ng kuryente ang Meralco, sila meron pa rin. And with the exception of the solar panel, all other components are inside the home, so it’s protected from the elements,” Batara pointed out. Fully charged, the LED lamp lasts about 8-10 hours. With LED boasting of more than 50,000 burning hours, and if the light is used for about 4-5 hours a day, it theoretically has a lifespan of approximately 10 years.

Such is the Adtel’s team zeal to contribute to poverty alleviation that Casas and Batara are constantly on the road in search of the most reasonably priced components for their solar power systems and devices.

“For every piece, we go to China, go to another province for another component, then we put it together— and each province is bigger than the Philippines,” Casas said. “That’s the only way to bring down the price.”

Added Batara: “We try to assess the need of the people and how they can speed up the replacement of the parts. It must be affordable, otherwise they will not really maximize the use of the system.” Thus far, Adtel has set up 14 pilot sites all over the country, from Luzon to Mindanao: in Caba, La Union; Jose Panganiban, Bicol; Tacloban, Leyte; and Sta. Cruz, Davao del Sur.

It has also given kits and provided streetlights (the company also distributes “Angel Eyes,” a solar-wind hybrid LED light) to BayaniJuan sa Calauan, ABS-CBN Foundation Inc.’s resettlement site for the Pasig River dwellers. “We never fully understood the meaning of alleviation of poverty until we installed this in remote areas. But, today people are so happy because the system’s working in there,” Casas observed. The Adtel chief emphasized that the whole exercise is partly a way for the company to test its concept and to get the word about the new product out to companies looking for CSR projects. To this end, Adtel is building relations and educating the local government units, private companies and electric cooperatives to adopt its system; this also affords the latter entities “incremental revenue in those areas that they don’t have business, the remote areas,” Batara noted.

“We’re not marketing directly to the 3.4 million homes,” Casas clarified. “Our selling point is, any private institution can adopt a CSR program, we just have to heighten the level of awareness of these 3.4 million homes that have never had electricity. Electrification has a very, very low level of awareness.” This is not to say Adtel is not intent on marketing to other industries. Its range of LED products, after all, has perfectly useful and practical applications in commercial fishing, outdoor advertising, perimeter and large-scale lighting projects such as mini grids, and energy saving solutions for homes and offices. The company is also working with private groups for other solar projects— the energization of the Pamana School in Oriental Mindoro funded by the Rotary Club of Makati East and energy saving solutions for the Southeast Asia Interdisciplinary Development Institute (SAIDI) in Antipolo.