WHEN Lopez Group chair Oscar Moreno Lopez turns 80 years old this April, the first thing he wants to do is climb another mountain, this time Mt. Kinabalu in Borneo. At 14,000 feet, it will surpass the highest mountains he has climbed in the Philippines, Mt. Pulag and Mt. Apo, both approximately 10,000 feet each. He recently reached the highest peak in the Visayas, Mt. Kanlaon.

Considered the wellness guru of the Lopez companies, OML, as he is fondly called by his officers and employees, never realized that he would be a health buff most of his adult life. In their younger days, he and his brother, the late Geny, were heavy smokers until a life-changing event changed OML’s addiction to cigarettes. His becoming a wellness advocate was a gradual thing. He can still remember what triggered it.

“Just before martial law, I was up in Antipolo at the Nipa Hut where my father used to spend his weekends. One night,” he narrates, “I felt pain in my heart. I woke up with a very sharp pain. I was brought to the Joseph Cotton Hospital (at the Meralco Compound). They checked me but they couldn’t find anything wrong. It was then that I became very conscious of my health because I felt that there was really something wrong.” Since that time, OML began reading up on health subjects and started to take vitamins.

“It was in the 1970s when I was smoking quite a bit, just like my brother Geny, around one pack a day. I began to realize after a while that smoking was bad. The pain sort of disappeared but I became very conscious about health issues so I started taking vitamins, read a lot of health books, and I began exercising. I was around 42 years old. Geny and I were smokers. So when he got sick of lung cancer, I said to myself, I should have gotten that too. I think what saved me was that I was taking a lot of vitamins. The only difference was that he never took to vitamins like I did.”

From that time till now, OML takes 20 vitamins every morning and evening, uses his treadmill at home or does rowing for a half-hour session, eats less meat and takes in more vegetables, fish and fruits. And of course everyone sees him always climbing up the six flights of stairs to his office at Benpres Building. (It was at this point that he asked me what exercise I was doing and for the first time in my almost 40 years of association with the Lopezes, I personally got a directive: “Can’t you go up by stairs to your 5th floor office?”)

An optimist, OML attributes his stamina to his wanting to prevent age from getting the best of his life at this point in time. “I feel great! If I can live to my 90s, I will be very happy!”

On family unity and humility
OML’s family is known for its closeness, and has a practice of eating dinner every Friday. Unless someone has an important function to attend, it is practically a “must-attend” activity. Being a closely-knit family was something OML saw with his late father-in-law, Ernesto Rufino. After his own father, Don Eñing, passed away in 1975, OML and his children would always have lunch with his in-laws on Sundays.

“The lunches promoted a good family atmosphere and so that helped,” says OML. “The best advice I always give them is family unity plus hard work. Yes, I heard we are known for being the working rich, but I want to put emphasis on the word ‘working.’” 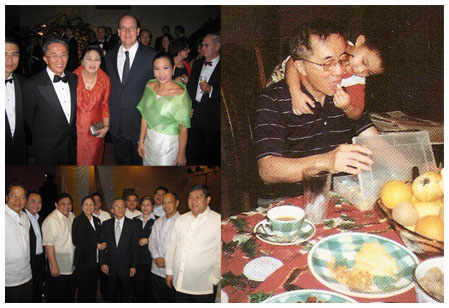 OML always considered his father as his big hero and the biggest influence in his life. “Every step of the way he was there, deciding what school we would go to. He was a disciplinarian from the start. He was a boarder at the Ateneo for seven years and he lived like a monk there,” recalls OML. “My being a disciplinarian, especially with my boys, was due to my father. I handed down to my sons what my father taught us—be strict with them while they’re still young, make the m study hard, and you won’t regret having done this.”

The self-effacing OML also reiterated that with the Lopezes, “bawal ang mayabang.” There’s a lot to be humble about, he points out. “The whole concept here is called stewardship,” says the chairman. “Actually we don’t own anything in this world, even these companies that we run. We are just stewards of these companies and we are here to see that they improve so we can hand it down to the next generation in a better shape than when we found it. That is my goal.”

He continues: “None of the Lopezes are arrogant, or he or she will be ostracized. It’s true. Arrogance in the Lopez family will not be tolerated. My father reached the point where he didn’t even want his name mentioned in the newspaper he owned, The Manila Chronicle. There was practically no mention of my father’s name. He was pretty invisible.”

Mr. and Mrs. Oscar Lopez, who have been happily married for 53 years, have lived in the same house at Wack Wack subdivision, Mandaluyong since the 1960s, one of the first residents there. The couple also likes to visit Baguio regularly.

A typical day for the head of one of Asia’s biggest business conglomerates is, unless there is an early meeti ng at the office, he usually wakes up around 8 a.m. After exercising, he goes to the office, presides over board meetings and heads for home if there are no social functions to go to. “I spend a lot of time reading or doing work in my library up to late at night. It’s the only time I have when it’s peaceful and quiet in the house.”

OML admits he loves to shop, for food. He has the usual credit cards and keeps only a few thousand pesos in his wallet. Regarding his eight children, he measures their successes by the way they work. “For my boys (Cary, Piki and Jay), I tell them that they have to be able to work well especially if they are working here in the Lopez group of companies. They may have all the opportunity to rise up but they must first see that their work is worthy of their upbringing and education,” explains OML. “I’m proud of the boys and I just hope they continue their good work.”

He also finds that his girls, like Cedie (Lopez Museum) and Rina (Knowledge Channel) also want to excel in their respective fields. Bea and Pia, including his youngest, Angela, are family persons who don’t really want to be working in the company. They have enough, he feels, on their hands, raising their children. Although with Angela, he feels she will be going into CSR work wherein she is presently undergoing training. And at 80, he believes that he has done his share of foreign travels. 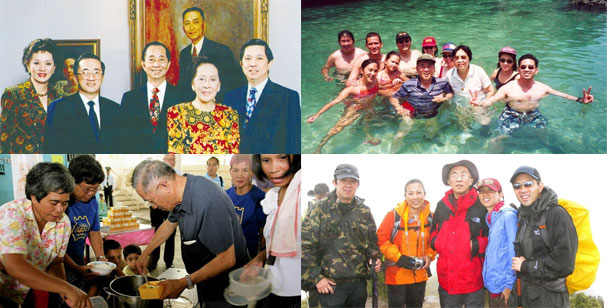 On retiring, company unity and his goals
OML plans to gradually retire. “Manolo [Meralco chairman Manuel M. Lopez] will be occupying some of my positions and soon he will take over the chairmanship of the Group. Gabby becomes the next generation’s leader,” says OML. “When I’m partially retired, I will be doing more work in CSR with the Lopez Group Foundation.” What makes him also happy is to have accomplished something at the end of the day. OML feels he has not yet completely achieved all his goals although now the companies are doing pretty well “because we were able to solve the debt problem last year.”

“At this point, I would still have to do some things primarily because I started a number of these movements when my brother died and I took over in 1999, and I would like to see it continue even after I completely retire,” he explains.

Promoting Group values, like business excellence, group unity and teamwork is something he would like to continue doing. “If you had an arrow, you can easily break one arrow. But if you get 20 arrows tied together, it’s difficult to break. That’s the kind of unity and teamwork I’m looking for.”

When the Lopez Group celebrates its 82nd “birthday” in June he says, “We should have a celebration of these values which are enunciated in the Lopez Credo. What he wants to do is to inculcate these values to all employees in the group, some 11,000 in all. The values will be printed, wallet size, and will be distributed to all.

“This is something I got from the president of Sumitomo when he visited us last December. I was admiring Sumitomo very much, and I said, ‘you have lasted for 400 years! How’d you do it?’” OML asked the president. “He answered partly because they have these values they all believed in, and he took it out of his wallet, just a small pamphlet which enumerated the values Sumitomo believed in. This is something I’d like to do also.” Another of his goals is to continue rolling out his many business excellence and wellness programs. To date, most of the Lopez companies are registered or certified with ISO standards and are into business programs like the Malcolm Baldrige, among others.

Although he does not necessarily want to be first in everything (since most of the Lopez companies’ names start with “First”), OML feels it is important to roll out all of these programs which will, no doubt, lead to business excellence. He wants the companies to last centuries and “outlast all of us!” OML also wants CEOs and employees to continue the good work. His advice: “Work hard and have the best interest of the company at heart and you will be rewarded.”

“And I just want to be able to say after I’m gone that I’ve done my share to improve the companies. Now it’s up to the successors to continue.