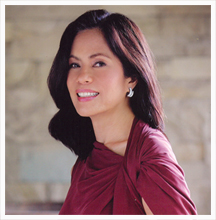 Gina LopezFrom Gina Lopez’s “From the Heart” column published in the Philippine Star on January 23, 2011. WHAT we have achieved as a confluence of effort, in a span of just almost two years, is truly remarkable. All we needed to do was look back and remind ourselves of what we’ve lost. We didn’t just forget the river, we also forgot to believe in ourselves, that together, the Filipino people can work miracles. Where once there was hopelessness, together we gave back hope. Where once there was despair, together we dreamed again. A river that once was dead, together we dare bring it back to life once more. The story behind the cleaning of the Pasig River is more than just physically cleaning the river.

When 1,216 families were moved from Estero de Paco to Calauan, Laguna—under the care of BayaniJuan—people didn’t just change their address, they also got a fresh and promising start. When 3,200 cubic meters of trash were being taken out of the estero, the creek wasn’t just cleared up, bridges were also paved between the rich and the poor who both willingly jumped in the dirty creek to clean. When the estero was being dredged, sewered and landscaped, agencies didn’t just lend their trucks and heavy equipment, an entire team was formed—one that we seldom see—merging both the government and the private sector harmoniously.

When around 200 community volunteers were trained into becoming River Warriors,

Pasig River Map they didn’t just guard the river from trash, they are now dreaming bigger than they’ve ever dreamed before.

When the 10.10.10. fun run broke the Guinness Book of World Records, we didn’t just gather 116,086 runners, the world heard a solid call for a cause to challenge the impossible. The story behind cleaning the Pasig River is a story of a river reminding us of what we have forgotten. That through a united front, we can transform a hub of poverty and crime into a venue for a culture of openhandedness. Our team set out to change the river but the river ended up slowly changing us.