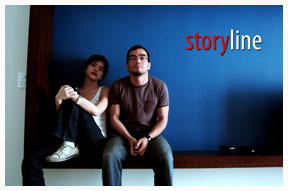 StorylinePatricia Evangelista, cocreator, writer and executive producer of “Storyline,” likes telling stories the way they are. To do that, she requires full control of production, cuts herself and her partner out of the budget before anyone or anything else, and is proud of her office’s new television, the first they have owned in “Storyline”’s nearly three years of production.

As an 18-year-old speech communications major in 2004, Evangelista won the Best Speaker award in the International Public Speaking Competition of the English-Speaking Union in London, beating 59 contestants from 37 countries. She went on to host the youth-oriented program “Y Speak” and “Breakfast Supersized” on Studio 23, the UHF channel of ABS-CBN Corporation.

Instead, Evangelista joined ABS-CBN News Channel (ANC) as a production assistant for Cheche Lazaro’s “Media in Focus.” In 2007 she pinch-hit as executive producer when Twink Macaraig left the program, an assignment that became permanent and garnered the show a Catholic Mass Media Award. “I received the best training (under Macaraig),” she says.

Soon after Glenda Gloria took the helm of ANC, Evangelista was offered the opportunity to produce a new show. With independent filmmaker Paolo Villaluna, an Urian award winner whom she met on the set of “Media in Focus,” she proposed a documentary profile show whose thematic episodes ran on narrative and cinema. The show had no host. That concept became “Storyline.”

And survive “Storyline” did, with two Gawad Tanglaw awards, a triple nomination and two medals from the 2011 New York Film and Television Festivals, and the critical acclaim of both journalists and filmmakers. Today, “Storyline” remains the only current affairs show without a host, whose theme song, written by Evangelista and Villaluna, performed by Pike and Veena Ramirez, is now a constant on mainstream ABS-CBN every Wednesday night.

The show’s budget may be a fraction of that of most current affairs shows, but it is a choice they make in exchange for creative freedom. “’Storyline’ opened up the possibilities of visual storytelling. We remain independent producers; we handle line production. We choose our own crew, we do not get censored. We just keep on telling each story the way it is, and we owe that to ANC.”

The shooting team has expanded from five to nine, all recruited from Villaluna’s independent film crews. What was once a two-person postproduction team now has a small support staff of former interns.

In the three years since “Storyline”’s first episode, Evangelista’s work as a human rights writer has built a body of work that includes this year’s “Kinse” film series, documentaries on the Maguindanao massacre, and weekly columns on military abuse, women’s rights and free speech. Villaluna’s full-length films continue to garner awards, even as the indie director who once refused to change his one pair of tattered shorts now directs multimillion-peso commercials. In spite of the daily scheduling battle, both still insist on personally writing and editing the show.

For LopezLink readers, Evangelista says: “Tell us your stories. We’re always looking.” In the first season of “Storyline,” without the budget for a researcher, she says they exhausted all their contacts, interviewing colleagues, college classmates, cousins, neighbors, anyone who could give a story.

“It doesn’t have to be a monumental story. It just needs spirit. We want a story that has heart, and we need a storyteller who can tell a story.” And for as long as there are stories, Evangelista says, “Storyline” will continue its own.

Email story proposals at storylineanc@gmail. com. “Storyline” airs on ANC Thursdays at 9:30 p.m., replays Fridays at 2:30 and Sundays at 3:30. The show also airs on Wednesday over ABS-CBN Channel 2 every Wednesday night after “Bandila.”