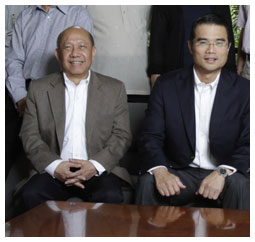 Elpidio L. Ibañez
Elpidio L. Ibañez is the president and chief operating officer (COO) of FPH. He is board director of various FPH subsidiaries and affiliates. Ibañez graduated with an AB Economics degree from Ateneo de Manila University and obtained his MBA at the University of the Philippines.

Fiorello R. Estuar
Fiorello R. Estuar became the head of the Infrastructure Business Development of the corporation in August 2007. He has been the vice chairman and chief executive officer (CEO) of First Balfour since November 2006. He was president of Maynilad Water Services from 2004 to June 2007. He also served as president of First Balfour from 2001 to 2004, and as a board member of Security Land Corp. from 2004 to 2006.

Ramon T. Pagdagdagan
Ramon T. Pagdagdagan is a VP and head of Internal Audit since August 2007. He has been with FPH since October 1994. He was AVP of the Internal Audit Group from April 2000 until July 2007. He was AVPcomptroller of FPIP from July 1997 to March 2000. He was assigned to Maxidata Inc. as assistant comptroller from July 1993 to September 1994. 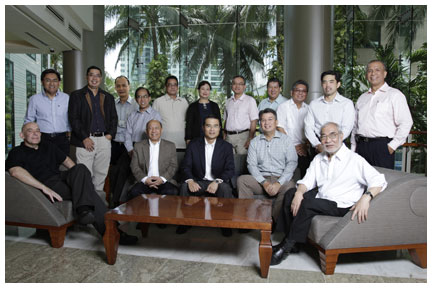 Benjamin R. Lopez
Benjamin R. Lopez is a VP and head of Corporate Communications. He has occupied this position since November 2006. He has been with FPH since October 1993. He was assigned to Rockwell in May 1995. Prior to his recall to FPH in June 2004, he was a VP for Project Development of Rockwell. He is also a member of the board of directors of various subsidiaries such as First Balfour, First Philec and First Philippine Utilities Corp.

Elizabeth M. Canlas
Elizabeth M. Canlas has been a VP since November 2007. She is a core group member of the Lopez Group’s Corporate HR, HR Council, CSR Council and the Lopez Lifelong Wellness team. She is the chair of the HR professional development committee of the HR Council and the functional head of the Human Resources Officers’ Committee of First Holdings’ Group HRs. She is also the managing editor of Tanglaw, the official publication of the FPH Group of companies.

Dr. Arthur A. de Guia
Dr. Arthur A. de Guia is a board member of FPH. He has also been the managing director for Manufacturing and Portfolio Investments of FPH since June 1997. Dr. de Guia has been an SVP of Manufacturing and Portfolio Investment of Lopez Holdings Corp. since January 2001. He serves as a member of the board of FPH subsidiaries and affiliates such as Philippine Electric Corp., FSCI, FPIP and First Electro Dynamics Corp.

Francis Giles B. Puno
Francis Giles B. Puno is director and chief finance officer of FPH. He was promoted as EVP in September 2011. He is also president and COO of First Gen; he is also director and officer of FPH subsidiaries. Puno has a BS Business Management degree from the Ateneo de Manila University and an MBA from Northwestern University’s Kellogg Graduate School of Management in Chicago.
Richard B. Tantoco
Tantoco is EVP of FPH and president of Energy Development Corporation. Prior to joining FPH, Tantoco was a member of consulting firm Booz Allen and Hamilton Inc. based in New York. He has a BS in Business Management degree from the Ateneo de Manila University, where he graduated with honors, and an MBA in Finance from the University of Pennsylvania’s Wharton School of Business.

Ariel C. Ong
Ong joined First Philec as a consultant in 2007. He was elected as VP of FPH last September 6, 2007 and is seconded to First Philec as an SVP. He is currently the president of Philippine Electric Corp., First Electro Dynamics Corp. and First Philippine Power Systems Inc. Prior to joining First Philec, he was regional VP/general manager and supply chain head for Southeast Asia of Avon Products-Asia Pacific Supply Chain. He is a mechanical engineer and obtained his Master of Science in Engineering (Energy) from UP in 1990.