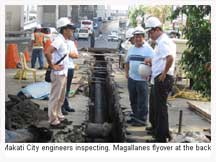 FPIC’s emergency response team responded to a report of seepage of petroleum-like fluid in the basement of a building along Osmeña Highway, Bangkal, Makati on July 12.

In spite of a lean organization of 45 employees including officers, FPIC deployed a crisis team with 20 employees posted on a 24-hour shift. The remaining 25 people covered for the regular jobs of the 20, who were literally nailed to the site. First Balfour, parent firm First Philippine Holdings Corporation and sister company First Gen Corporation also provided assistance to FPIC.

FPIC brought national and city agencies residents of the building to the excavated pipeline for a joint inspection. The pipeline was seen to have no leak nor damage. In fact, it was safe and well-maintained. FPIC took again the precautionary step of shutting down its pumping operations on July 21.

Despite proof of no leak in the pipeline, Makati City ordered its shutdown and directed FPIC to dig 13 additional excavations in two side streets, thereby extending the diggings over a 400-meter length of the pipeline.

With the forced shutdown, the oil companies, the users of the pipeline, experienced temporary shortage in their gas stations. The Department of Energy voiced concern over the fuel shortage. Makati City, after expedited its inspection of the pipeline and, finding no leak, allowed pipeline operations to resume on July 24. Gas tester readings have consistently been zero.

On July 28, the newspapers reported that Makati City has cleared the pipeline of any involvement in the petroleum seepage incident. FPIC continues to cooperate with the government of Makati City.