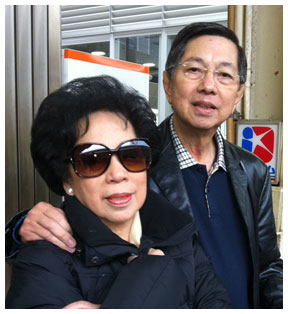 Amb. Manuel M. Lopez and wife Maritess L. LopezAmbassador Manuel M. Lopez (AMML), chairman of the Lopez Group, celebrates his nth birthday on May 20 at his post in Tokyo with no fanfare. He expects only to go to mass with his wife Maritess, the day being a Sunday, and then to a restaurant for some yakitori, his favorite Japanese dish.

“Frankly, as you get older, birthdays are not things you look forward to anymore. I haven’t really thought about it. Being away from home, I don’t really know what to do unlike in the Philippines where you expect family, grandchildren and friends to visit you. But who knows, maybe one of the kids will surprise me,” the ambassador told LopezLink on Skype in April.

Having already accomplished so much in his career as businessman and professional manager, as well as in his personal life as a family man, AMML’s current aspirations center on serving the country as a diplomat.

“I would like to bring more Japanese investments in the Philippines to create more employment opportunities for our kababayan, and to bring in more tourists. These are the major things we need to accomplish: investments and tourism. At the same time, there are 220,000 Filipinos in all of Japan. We want to make sure their needs are attended to by the embassy staff. That is a very important objective as well.”

AMML said the value of malasakit, which he inculcated among the over 5,000 employees of Meralco in the last 25 years, is something that is now being practiced at the embassy in Tokyo.

“What I’m asking of the staff is to go the extra mile for our countrymen. We have to understand that they have been away for some time from the country and sometimes, miscommunication can happen. There may be some underlying reasons why problems they bring to the embassy are not resolved right away. But we should never be construed as being indifferent about the needs of the Filipinos here. We have to make sure that our kababayan do not complain about the quality of service. Whatever it is they need—whether an extension of their passports, application for new passports—all must be attended to quickly. We must treat them very well,” he said.

The ambassador served as Meralco president from 1986 to June 2001 and as chairman from 2001 to 2012. He concurrently served as Meralco chief executive officer from 1997 to 2010. He said the culture in the private sector is different from public service, thus requiring some adjustment on his part.

“We are few in the embassy compared to the thousands we had in Meralco, but we are an institution no matter how small the numbers are, and we look to our kababayan, the 220,000 Filipinos in Japan, as our market.”

Although the embassy is undermanned and on a modest budget, AMML believes they are able to cope because of the value of malasakit.

“It is a challenge but I have a good staff. We are willing to work even on weekends. During calamities, like last year’s tsunami, we were on 24/7 duty. We are ready for any eventuality,” he said.