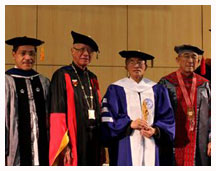 OML enrolled at the Ateneo twice, for two years in the 1930s in between stints at the former Iloilo Normal School (now West Visayas State University) and Markynoll in Baguio, and then for several months as a high school senior after World War II. In his acknowledgment speech, the chairman emeritus described his stay at the Ateneo as a very important period of his life during which he imbibed two ideals: “magis, the desire to be more, to seek more, to treasure the quality of what we do, instead of simply the act of doing,” and excellence, as represented by his teacher and Ateneo hero Fr. Jaime Bulatao.

Excellence, he pointed out, is explicitly stated in the Lopez Credo as one of the seven core Lopez values according to which the companies in the Group are managed and conducted, and of which he serves as custodian and champion. He also promised that under his watch, the Lopez Group and its employees will strive to live up to these values within the context of the ideal of magis, the desire to do more, to do good, for the greater glory of God.

“It is my fervent hope that the Lopez Group of companies can outlast all of us here, hopefully for a few centuries as Ateneo has achieved in doing,” OML said.