Rockwell community comes together to help

Amb. Manuel M. Lopez with Japan ministerRockwell Land Corporation in partnership with the Japanese Embassy recently hosted a community bazaar and celebrity auction at the Rockwell Tent to help raise funds for Japan.

Amb. Manuel M. Lopez witnessed the devastation that the disasters had wrought and sought to make it a personal cause to help with rebuilding. The ambassador, who chairs both Rockwell Land and Rockwell Leisure Club, managed the participation of the Rockwell team from overseas. Entitled “Love Japan,” proceeds of the celebrity bazaar and auction went to the Japanese Embassy.

The proceeds were handed over by Amb. Lopez as well as representatives of Rockwell to Minister Motohiko Kato of the Japanese Embassy at Chef Jessie’s at the Rockwell Club. 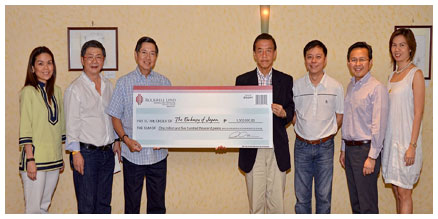