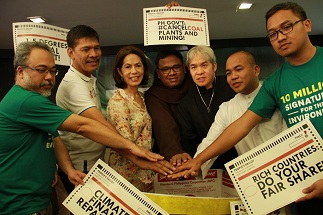 Sectors unite for the environment. Jaybee Garganera of Alyansa Tigil Mina, Leody de Guzman of Bukluran ng Manggagawang Pilipino, Gina Lopez of ALKFI-Bantay Kalikasan, Bro. Angel Cortez of Ecological Justice Interfaith Movement, Fr. Raul Enriquez of Philippine Against Dirty Energy, Fr. Dakila Ramos of AMEN, and Atty. Aaron Pedrosa of SANLAKAS and Philippine Movement for Climate Justice put in their demands for the sake of the environment into a ballot box, to signify their challenge to election candidates and the government to make a stand for the environment and act on climate change.Multi-sectoral organizations from all over the Philippines bared 10 million signatures for the environment and launched a united call to the government and the candidates in the 2016 elections to champion the protection and preservation of the environment, as the climate change talks in Paris, France comes to a close on Friday (December 11).

Gina Lopez, Chairperson of ABS-CBN Lingkod Kapamilya Foundation, Inc. (ALKFI) presented the signatures gathered in support of the Save Palawan Movement’s No To Mining campaign and the Bantay Kalikasan’s Yes to Agriculture and Ecotourism campaign, in a press conference held with representatives of over 800 other pro-environment and climate justice groups in the Philippines.

“These are 10 million people who don’t want the environment destroyed. 10 million Filipinos who are looking for leaders that are not afraid to take huge and concrete actions for the environment, especially as we begin to face the dangers of climate change,” she said.
In her presentation, Lopez refuted the claim that mining can alleviate poverty, citing a study conducted by natural and social scientists from Palawan State University, Bicol University, and Mindoro State University that showed mining communities are actually losing more than P2 billion and will lose more due to the economic costs of mining.
Lopez said the country, said to be the world’s 3rd most vulnerable nation to effects of climate change, would benefit more if the government would focus on ecotourism and agriculture, especially with the country’s rich natural resources and biodiversity. She cited the success of existing projects in provinces such as Samar and Batangas, where communities have been able to prosper without mining.
Apart from the threats brought about by mining, speakers during the media event also emphasized the ill effects of “dirty energy” to the environment, such as the use of fossil fuels like coal to generate power. Moreover, another sector reiterated Pope Francis’ call to world leaders to respect the “integrity of Creation” by honoring their commitment to implement pro-environment measures.
The groups are currently working on a series of activities in the coming year to raise awareness on the various environment issues in the country and to push for better and stronger policies on the environment, such as rescindment of mining or coal power plant operations and applications. They also plan to take the necessary steps towards bringing justice to parties that have already contributed to the degradation of nature.
Prior to this event, the groups have joined forces in the March for Climate Justice last November 2015, which was done simultaneous with similar activities held by pro-environment groups in other parts of the world to mark the beginning of the 21st session of the Conference of the Parties (COP21), a meeting of world leaders and policy-makers to seal the new global agreement on climate change. (Stories/Photos: Ana Junio)