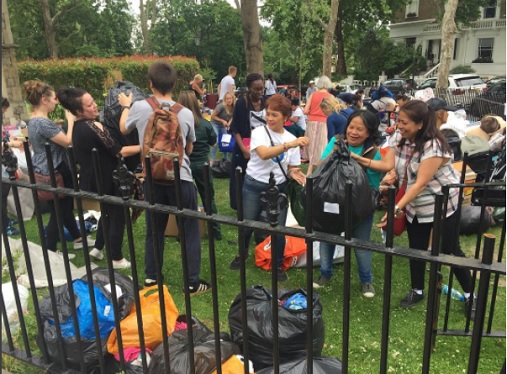 Filipinos bring to life the ‘bayanihan’ spirit by helping at the relief operations after the massive fire that hit Grenfell Tower in West LondonABS-CBN Foundation Europe CIO joins public and private support for the victims of the massive fire that hit the 24-storey residential London Grenfell Tower in West London on June 14, by organizing the eight-hour “Operation Sagip Telethon: A Bayanihan For the Victims of the London Grenfell Tower Fire” on June 25 starting at 1 p.m., London time.

Driven by the Filipino tradition of community spirit or bayanihan, ABS-CBN Europe Foundation is making a call for donations not only in United Kingdom (UK) but from all over Europe, for the residents affected by the fire, via the hotline +44 (0) 2072444520.

“Operation Sagip Telethon: A Bayanihan For the Victims of the London Grenfell Tower Fire” is making the call for donations up to 9 p.m. London time. The telethon will be streamed via TFC online (TFC.tv) and TFC IPTV in Europe, with live updates from facebook.com/TFCEurope.

According to Luis Bariuan, Trustee of ABS-CBN Foundation Europe: “We are widely known for our unique culture and at its core is the quintessential Filipino trait of bayanihan which inspires us to come together as one community with one goal in mind. We are rekindling that spirit of bayanihan by making a call for donations to support residents affected by the London Grenfell Tower fire”.

However, Bariuan says the community spirit does not stop there. “In bringing life to bayanihan, we transcend barriers. As this tragedy faces us, we hope to bring the needed help to both victims and survivors, including their families, with the support we may be able to inspire through the telethon”.

The Philippine Embassy in London expresses gratitude to Filipinos who have so far volunteered at the reception centres and drop-off locations for donations. The official statement from the Philippine Embassy shares: “We thank the Filipino communities in London and beyond for their generosity with their time and resources and their genuine concern as they volunteered and donated”.

As of this writing, The Philippine Embassy in London reports that nine Filipino families have been accounted for.

Some of these Filipinos include:

One Filipina, Ligaya Moore, is presumed to have died in the fire after having remained missing since June 14.

The Philippine Embassy is pursuing search operations in rest centres and drop-off locations for donations, and hospitals to determine the total number of survivors and fatalities.

The diplomatic post has also requested for the official list of tenants of the tower from the Royal Borough of Kensington and Chelsea.

While it has yet to ascertain the total number of Filipinos affected, Consul General Senen Mangalile, in an interview with ABS-CBN.com, assures: “As always, the embassy is ready to give assistance to them". These include assistance from the Department of Foreign Affairs in providing new passports and other vital documents.

The Grenfell Tower in London is a residential tower built in the 1970’s. According to a report from Buenafe, the tower is home to many Filipinos because they were recipients of council housing flats extended by Prime Minister Margaret Thatcher to all low-income migrant families during the ‘70s.

To extend your donations for the victims of the London Grenfell Tower fire, you can call +44 (0) 2072444520 (call charges may apply). You may also deposit through the

For more details about the “Operation Sagip Telethon: A Bayanihan For the Victims of the London Grenfell Tower Fire”, you can call +44 739 287 0779. (With additional reports from the Philippine Embassy in London, ABS-CBN Europe and Middle East Bureau Chief Danny Buenafe and abs-cbn.com. Photos courtesy of abs-cbn.com and Danny Buenafe)

A massive fire hit the London Grenfell Tower on June 14, Wednesday. The United Kingdom Metropolitan Police reports that as of this writing, the death toll is at 79 and commander Stuart Cundy says the death toll may still rise.

Massive ashes and debris remain at the 24-storey Grenfell Tower after the fire as seen in Cathy Yang's interview with Buenafe on ANC's “Business Nightly.” 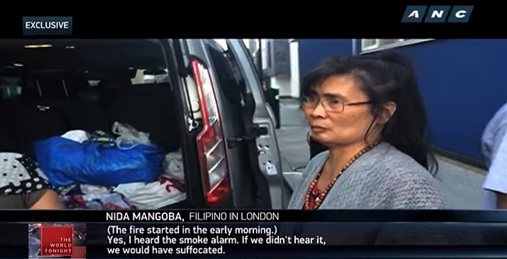 Filipina survivor Nida Mangoba recounts the tragic morning in an interview with Buenafe, as seen in a report on “The World Tonight.”

Filipinos from United Kingdom and nearby areas continue to help prepare relief goods for victims of the Grenfell Tower fire as seen in this report by Buenafe for Balitang Global.