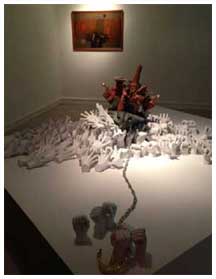 In the tradition of exhibitions past given to wordplay, Lopez Museum presents Grounded broadly suggestive as it is of a stretch of phrases: failure to launch, electronic misfires, immobilized states, rootedness. Fittingly enough, this latest exhibition poses Lopez Museum as it emerges from its fairly recent coming of age (having gone public in 1960) and as it prepares for a big move to Rockwell Makati making this as good a time as any to take stock and push itself through time and space.

As Lopez Museum is still associated with its trove of Lunas, Hidalgos and not insignificant assembly of Filipino modernists’ work, Grounded asks: how is that art can be seen as a means to take flight while remaining anchored at the same time? How can a sacralized space like a museum turn into a site that hosts such contradictions? How can this dis-ease, of straining forward while staying entrenched make for a productive place, of navigated distress?

The exhibition frames these queries through pieces that have long been accessioned into Lopez Museum archives such as Amorsolos, Lunas, Hidalgos, along with Manuel Blanco’s Floras de Filipinas, and period images from the Ambassador Jose Teodoro bequest, among others.

The exhibit will be punctuated by works of National Artists Jose Joya and Federico Alcuaz, Juan Arellano, Roberto Chabet, Brenda Fajardo, Juvenal Sanso, Nena Saguil, and Pacita Abad, Grounded is a visual simulation of layered conversations emanating from a cacophony of sensibilities and diverse bases.

Grounded is curated by Back to Square Juan artistic director Claro Ramirez. It will run until August 3, 2013. Lopez Museum and Library is at the G/F Benpres Bldg., Meralco cor. Exchange Rd., Ortigas Center, Pasig City. Museum hours are 8-5pm Mondays through Saturdays except Sundays and holidays.