Journos open up in ‘Newsroom Shutdown’ 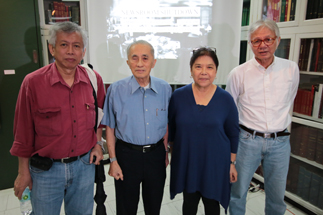 Speaker Ceres Doyo, a longtime human rights advocate and worker, came early and took the opportunity to roam around the galleries. She stopped at the rotunda to admire Juan Luna’s España y Filipinas.

Vergel Santos, who had attended the opening reception of the exhibition Drawing the Lines in February, also took another look at the editorial cartoons that lined the walls. Then, he and his colleagues from the now-defunct The Manila Chronicle, as well as artists who did editorial cartoons for various dailies, had huddled in conversation. This speaking engagement was another chance to visit the show.

Jose Lacaba’s entrance elicited excited mumbling from the students in the audience. They clearly knew who he was, perhaps admirers of his works.

More than the caliber of Newsroom Shutdown’s speakers, it is the topic that makes it timely and relevant in light of the current national situation. The presentations of the panelists offered different perspectives of the censorship that was enacted during the onset of martial law under then President Ferdinand Marcos.

In her presentation “Better Dead than Read,” Doyo spoke of an article that landed her on the list of journalists to be publicly interrogated. Entitled “Was Macli-ing killed because he damned the Chico Dam?”— the title given by her then editor Letty J. Magsanoc—the article spoke of the death of the Kalinga chieftain who led his tribe’s opposition to the Chico Dam project. However, Doyo’s brush with interrogations and the military was not only due to this particular article, but also because of other biting stories she wrote for the mosquito press and other publications at the time.

In his segment, Santos narrated: “Censorship impacts furthest and widest. A nation of 39 million awakes to a day without newspapers, a day of soundless and pictureless television, a day of voiceless radio. Radio plays some music, but music of the funereal sort, doubtless meant to heighten the sense of graveness in the air.”

Santos said that although he did not suffer the same fate as some of his fellow journalists, being witness to violence and censorship was also crippling. Censorship need not be merely the presence of brute force and coercion. He suggested that censorship does not only speak of a dictator’s influence but can also take the form of a self-imposed filtering that is socially and politically structured—a kind of complicit self-censorship.

Lacaba took the mic and broke the somber wall. Soon the room was filled with laughter. He kept the mood light even as he spoke about the torture that he experienced while in detention. Aside from working with mainstream and “UG” (underground) news publications, Lacaba aligned his literary pursuits with nationalistic endeavors. One of his most well-known works is the poem “Prometheus Unbound.” He disclosed how he inserted a subversive message that went unnoticed and was published by the editor.

Philippine history speaks of collective memory, often shrouded with ascendant voices that assert their account. Newsroom Shutdown invited these journalists—and storytellers— to engage the public to think about the aftermath of the Marcos dictatorship and to speak of the importance of learning from the consequences of history.

Newsroom Shutdown was presented in part by Gourmet Farms Inc.

The Lopez Memorial Museum is at the ground floor, Benpres Building, Exchange Road corner Meralco Avenue, Pasig City. Museum days and hours are Mondays to Saturdays, except holidays, 8 a.m.-5 p.m. Avail of unlimited access to exhibitions and library resources by signing up for the Lopez Museum membership program. Members can borrow books from the lending section and get discounts on lectures, workshops and services for only P1,500.