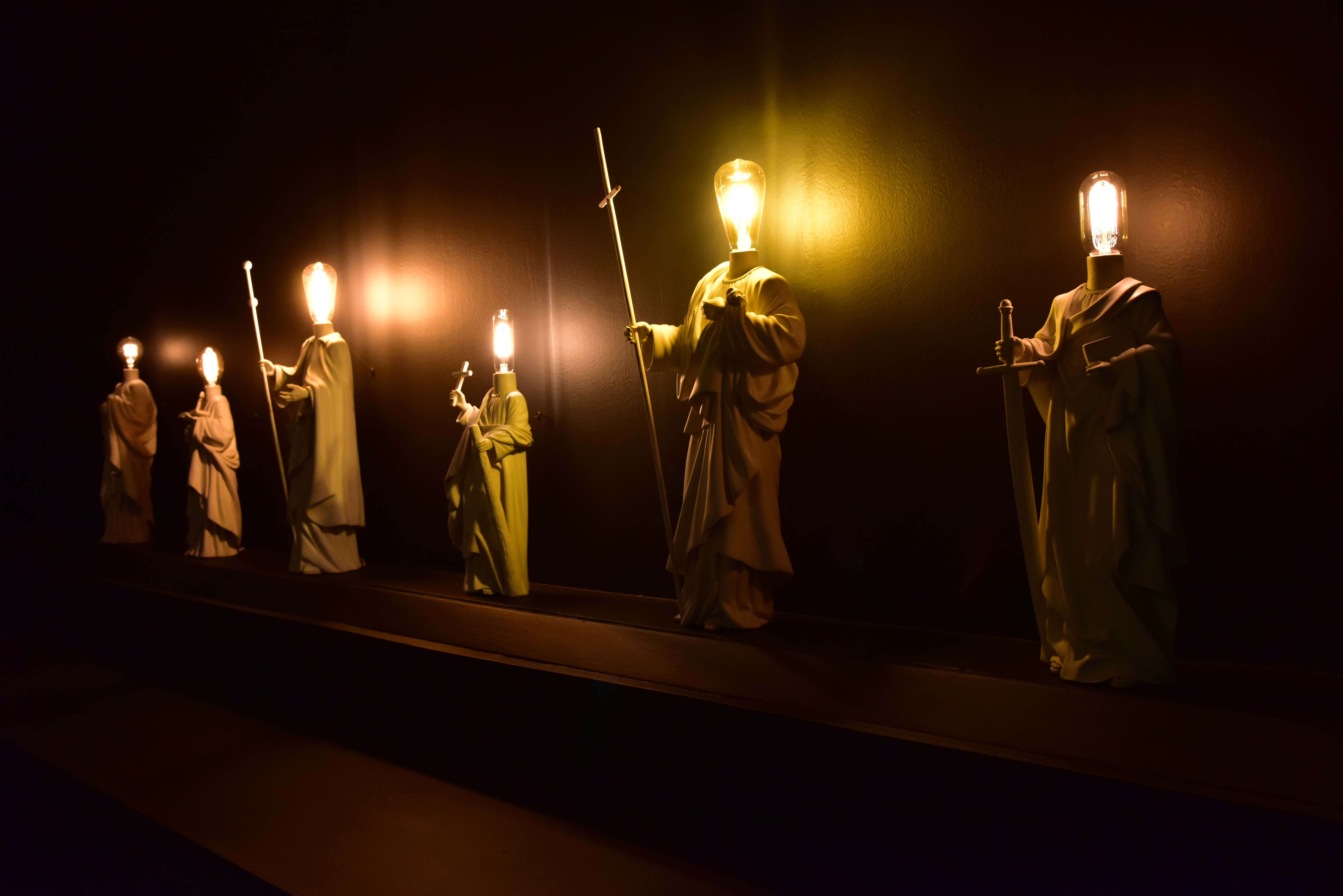 Anton del Castillo's mixed media piece, True FormNovember is the final month to view the two shows of the Lopez Museum and Library for its second exhibition cycle, TheGivenOrder and What Do I Say to a Giant.

Featuring guest artists Jason Dy, S.J. and Anton del Castillo, The Given Order approaches the topic of religion from standpoints and visual explorations that tackle different tangents of faith.

Drawing narratives from Christian biblical text, Del Castillo’s canvases and sculptures are a jolt from the divine imagery normally associated with creation and exile. His works show faces hidden behind gas masks, men in suits and the allegorical apple. Del Castillo stretches the boundaries of his art practice, displaying not only wall-bound paintings, but also reliefs, sculptures and installation pieces spread across the gallery.

Dy’s installation piece weaves together a narrative of a community and its encounter with the divine. A practicing priest, Dy attempts to make belief tangible, one that can be approached visually. Taking inspiration from a makeshift chapel in Calais, he sets up a space of worship using materials familiar to the community. With their help, pieces of cloth were sewn together, while plastic bags with prayers inside were blown up and hung from the tent’s ceiling.

Featured works from the museum’s permanent collection also tackle the themes of religion and the afterlife, from Hidalgo’s canvas of La Barca de Aqueronte to pottery from the 15th-16th centuries. This exhibit was curated by Ricky Francisco.

What Do I Say to a Giant tackles the life, career and works of National Artist for Literature Nick Joaquin as his alter ego, Quijano de Manila. What Do I Say to a Giant attempts to flesh out this monumental character by following the trail he left behind in the form of friends, news articles, poems and prose. This library exhibit features photographs of scenes straight out of the late seventies and the early eighties, when journalists capped the day with cold beers and boisterous conversation; in one photo, Joaquin is seen holding up his bottle of beer amidst colleagues and friends.

Featuring two guest artists, Marc Gaba and Teaching Exhibitions, What Do I Say to a Giant grasps at the flints of memory left behind by the writer in celebration of his centenary. The exhibit is curated by Thea Garing.

The Lopez Museum and Library is at the ground floor, Benpres Building, Exchange Road cor. Meralco Avenue, Pasig City. Museum days and hours are Mondays to Saturdays, except holidays, 8am5pm. Avail of unlimited access to exhibitions and library resources by signing up for the Lopez Museum membership program. Members can borrow books from the lending section and get discounts on lectures, workshops and services for only P1,500. For other inquires and concerns, and for scheduling of special tours and field trips, call 631-2417 (museum) or 631-2425 (library); or email lmmpasig@ gmail.com.(Story/Photos by: Thea Garing and Yna Musico) 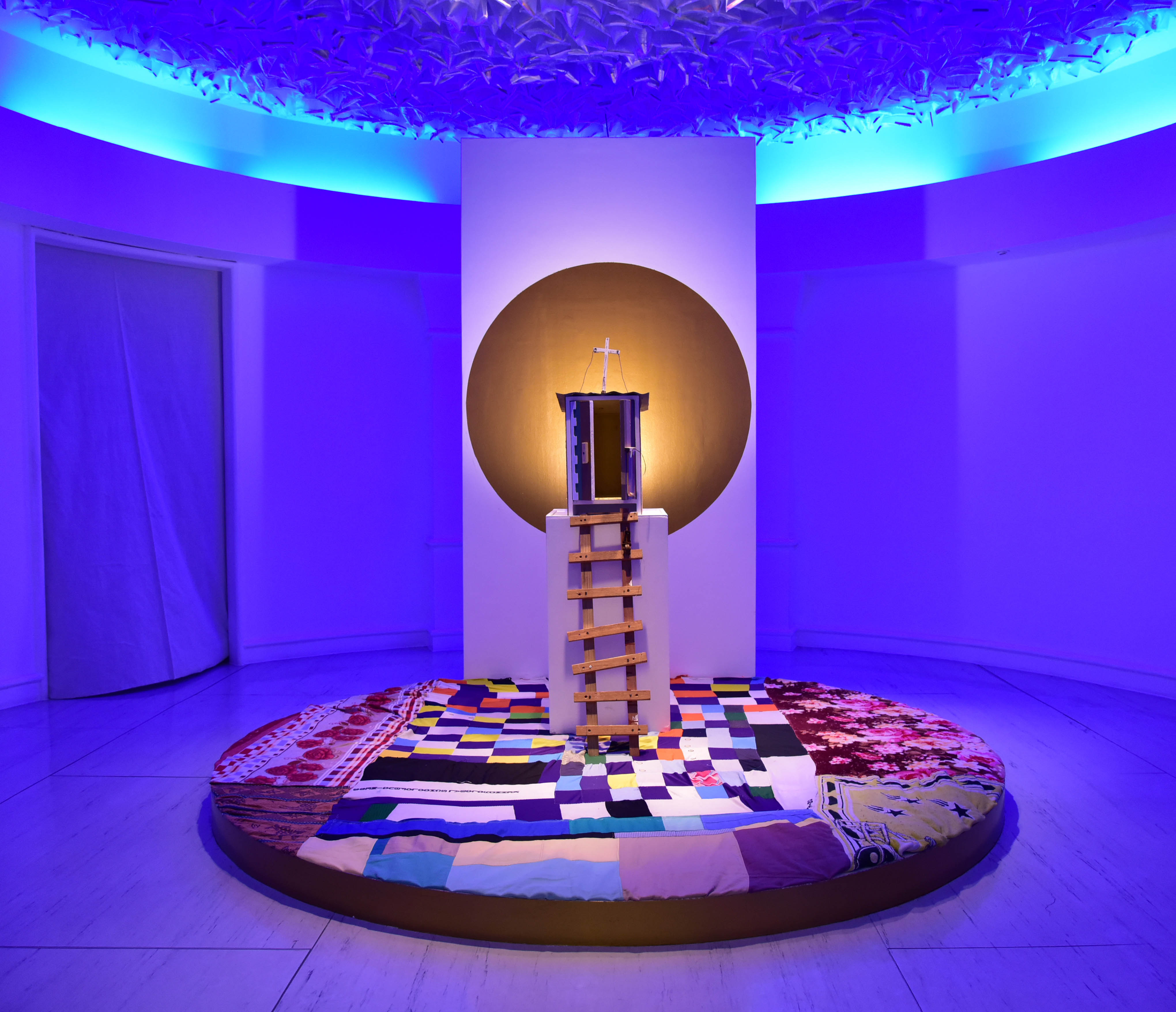 Jason Dy, S.J.’s Kanlungan ng Awa, a remount of the 2016 installation at the Kristong Hari Parish