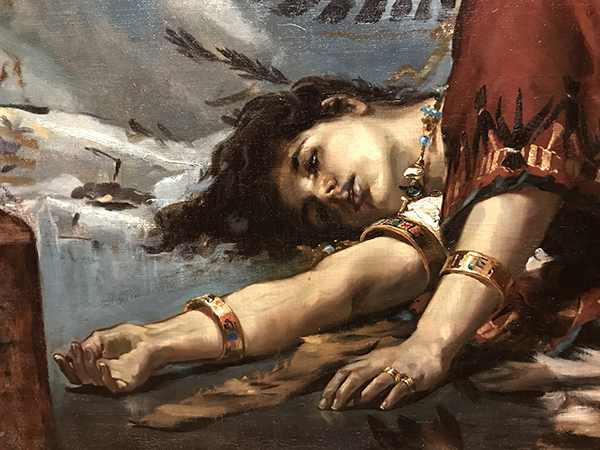 Detail from Luna's 1881 work, 'La Muerte de Cleopatra,' from collection of the Prado MuseumAfter years of being courted by the National Gallery of Singapore (NGS), the Lopez Museum lends its masterpieces to NGS for Between Worlds: Raden Saleh and Juan Luna, the most comprehensive Luna exhibition to date that brings together rarely seen paintings from public and private collections across the Philippines and Spain.

One highlight is the Prado Museum’s La Muerte de Cleopatra. The mural won Luna a silver prize in the 1881 Exposición Nacional de Bellas Artes in Madrid at the age of 24, three years before he would win the gold prize for his famed Spoliarium.
Prior to the ongoing exhibition, La Muerte de Cleopatra had never left Spain and had been in storage for nearly 100 years. The painting had to be restored for the exhibition and flown to Singapore by freight plane because of its scale.

By bringing such pieces together in one place, visitors in Southeast Asia are able to catch a rare glimpse of some of Luna’s most important works across his career, witnessing his technical mastery, range and development as an artist alongside concurrent historical and artistic movements of the 19th century.
Lopez Museum’s largest loan

For the Lopez Museum, participation in Between Worlds: Raden Saleh and Juan Luna constitutes its largest loan to
ever leave the country. The paintings had to be delicately prepared for travel and flown to Singapore in separate flights with accompanying couriers.

Included in the loan is the museum’s prized painting, España y Filipinas,an allegorical representation of the relationship between Spain and the Philippines. Luna had spent time on the subject, producing different versions, two of which are united in the exhibition for the very first time in Asia.
Rise of nationalism

The exhibition draws attention to 19th-century Southeast Asia, a period that saw the emergence of nationalism at a time when European expansion and colonial rule was at its highest point.
For the arts, this manifested through visualizations of a national identity, captured through depictions of landscapes and peoples of Southeast Asia by their own native hand: Raden Saleh for Indonesia and Juan Luna for the Philippines.
Both artists were central to cultivating a spirit of nationhood, producing compelling paintings that reflect the artistic, cultural and social dynamism of their time.
Impressionist masterpieces from Paris

BetweenWorlds:RadenSalehandJuanLuna is presented in parallel with Colours of Impressionism, an exhibition of 19th century European masterpieces from the Musée d’Orsay in Paris, including key works by Monet, Renoir, Pissarro and Cézanne.

Together, the two exhibitions illustrate the innovative painting styles and art movements that emerged in Europe, which were—and continue to be—influential in the development of art in Southeast Asia and around the world.
Between Worlds: Raden Saleh and Juan Luna closes on March 11, 2018, National Gallery of Singapore.

The Lopez Museum and Library is at the ground floor, Benpres Building, Exchange Road cor. Meralco Avenue, Pasig City. Museum days and hours are Mondays to Saturdays, except holidays, 8am-5pm. Avail of unlimited access to exhibitions and library resources by signing up for the Lopez Museum membership program. Members can borrow books from the lending section and get discounts on lectures, workshops and services for only P1,500. For other inquires and concerns, and for scheduling of special tours and field trips, call 631-2417 (museum) or 631-2425 (library); or email This email address is being protected from spambots. You need JavaScript enabled to view it. . (Story/Photos by: Marga Villanueva) 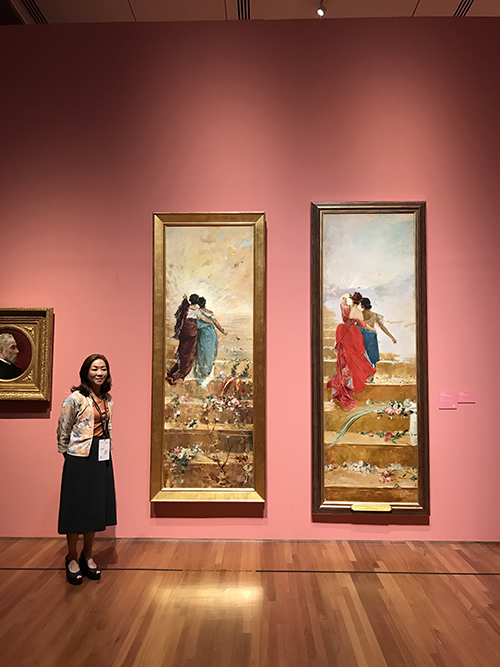