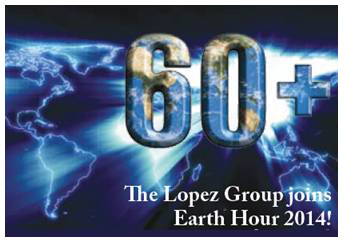 Earth Hour 2014For the fifth straight year, the Lopez Group will join the world in observing Earth Hour, whose 2014 edition will take place on March 29 at 8:30 p.m.

The Environment Committee of the Corporate Social Responsibility Council encourages Lopez Group companies to help increase awareness for the voluntary switch-off by putting up announcements in strategic locations in and out of their respective buildings.

Last year, Rockwell responded to the call by putting up a billboard announcement at Estrella corner EDSA in Makati, while First Balfour placed one in front of their Parañaque headquarters. Other Lopez Group companies, such as Energy Development Corporation, ABS-CBN and First Gas, also put up posters declaring their support for Earth Hour.

Aside from having Spider- Man as its first “superhero ambassador,” the movement’s eighth year is marked by the rollout of a digital crowdfunding and crowdsourcing platform called Earth Hour Blue.

Filipinos in particular will benefit as Earth Hour Blue participants, among other goals, will “help communities in the Philippines build fiberglass boats to withstand climate impacts like typhoon Yolanda.”

Earth Hour, which began in Australia in 2007, is a symbolic action against climate change. It has grown to become the world’s biggest recurring environmental mass action, with as many as 154 countries taking part in the switch-off. (Dulce Festin-Baybay)