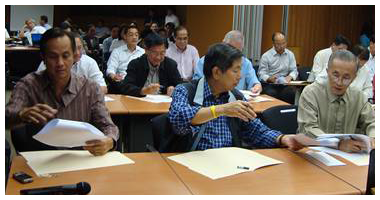 In 2005, the first edition of Bridges Magazine was published which collated group-wide CSR efforts. It showed, for the first time, the nationwide extent of the CSR and philanthropic activities of the Group.

At the international level, LGFI hosted the Global Philanthropists Circle Summit with Synergos in Manila which consisted of leading families in the US and the Philippines.

In 2006, LGFI was given certification by the Philippine Council for NGO Certification (PCNC), with donee status from the Bureau of Internal Revenue (BIR), enabling Lopez companies to fund, through LGFI, its CSR projects.

As a result of the oil spill in Guimaras, LGFI assisted the victims by establishing the Halad sa Guimaras program through a land donation, and the building of the Eugenio Lopez- Gawad Kalinga Village in Jaro, Iloilo in partnership with the Archdiocese of Jaro. The Family Planning in the Workplace program with an initial five Lopez companies was also started.

In 2007, LGFI started its publication venture with the coffee table book, Iloilo: A Rich and Noble Land, in cooperation with the Iloilo Economic Development Foundation.

In 2008, Rafael M. Alunan was appointed president of LGFI. LGFI coordinated the Group’s donation to the Philippine Military Academy’s Hall of Leaders and supported the hosting of an international scientific workshop on mangroves and seagrasses along the Verde Island Passage by the World Conservation Union through First Philippine Conservation Inc.

In 2009, LGFI obtained a grant from the Australian Agency for International Development for peace education modules through Knowledge Channel. LGFI published the Cory Magic book with ABSCBN, Ayala Corporation and Meralco.

In 2010, Lopez family members and company CEOs signed the CSR Magna Carta, which lays the framework for strategic CSR group-wide. LGFI became an auxiliary social welfare and development agency of the Department of Social Welfare and Development (DSWD) and was given a three-year PCNC renewal certification. In 2012, Mercedes Lopez Vargas was named president of LGFI, succeeding Alunan, who retired.

In 2013, LGFI coordinated the Group’s conglomerate-wide relief and rehabilitation activities following the onslaught of super typhoon Yolanda. It also renewed its PCNC certification for five years and its BIR donee status for five years and re-registered with the DSWD as an auxiliary social welfare and development agency for three years. (Story by Dulce Festin-Baybay, Carlos Campos)