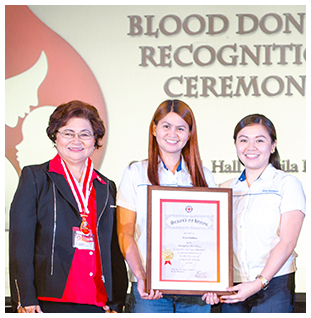 Human Resources-Employee Relations’ Anchel Cruz, who has been spearheading the annual bloodletting activity since 2003, and Environment, Safety and Health’s Mehlani Morada received the plaque on behalf of the company.

The Scroll of Honor is one of the national awards given to honor the spirit of volunteerism among PRC’s blood donors and institutional partners. The length of partnership with PRC and quantity of blood collection are some of the measures considered in choosing the awardees.

“With the remarkable experience and amount of positive feedback each blood donation drive brings, First Balfour is even more inspired to bring this CSR initiative to more places to be able to help more people,” Cruz said.

First Balfour’s annual blood donation drive has been helping save lives since 2003. To date, records show over a thousand successful donors among First Balfour employees, partners and clients. The Benpres Building in Ortigas has been its home for nine years.

The drive’s 10th anniversary, themed “Be Someone’s Superhero: Save Lives By Donating Blood,” was held for the first time in First Balfour’s corporate facility in Sucat, Parañaque in March 2012. Since then, the organizers—the HR and ESH departments—have extended its reach by holding blood donation drives in project sites outside Metro Manila. (Story by Dolly Pasia)