Uplifting Lives and Communities through the Gift of Learning 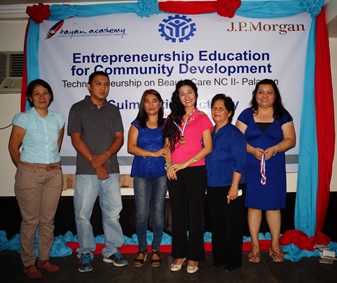 Melinda (fourth from left) received her medal at the culminating activityJPMorgan Chase & Co. and Bayan Academy continue to educate and empower through its Entrepreneurship Education for Community Development

In extreme situations of poverty, hope shines brightest in real-life examples of individuals who remain positive and persevere despite challenging odds. The stories of 3 individuals, who persevered despite the challenges and the odds, were able to earn decent living and uplift their lives and that of their family’s – thanks to the JPMC Entrepreneurship Education for Community Development (JPMC EECD), a program of JPMorgan Chase Co. through the JPMorgan Chase Foundation and Bayan Academy for Social Entrepreneurship and Human Resources Development (Bayan Academy).

Melinda Bernabe, Edwin Gialolo and Ronnie Boy Flores come from different backgrounds but all share the same aspirations – to help their families by providing for their needs, to get education and employment and to improve their lot. Through their training at the JPMC EECD, they were able to gain not only education and employment but also the self-confidence and the hope to move forward in their lives and see themselves in a better light.

Becoming Her Own Entrepreneur

Melinda Bernabe may have once been a shampoo girl in a hair salon, but now, she operates her own hairstyling and foot spa business at her hometown in Taytay, Palawan – the result of her training with JPMC’s EECD. Born to a poor family with five children in a remote area, she was forced to stop going to high school in order to help support them.

While she married young, her husband left her and their 2 children, forcing her to work in a beauty parlor. “I wanted to work as a beautician when I was young. It was my dream, but I do not have the means to study,” she said.

So when the opportunity to join the JPMC EECD came, Melinda grabbed it and decided to study. For 30 days, she acquired skills by gaining knowledge inside the classroom and experience during their class inside the salon. After her graduation, Melinda took and passed the TESDA’s Beauty Care NC II assessment in 2014. She went back to her hometown to start her own small salon -- Melinda’s Touch -- in front of her house.
Three months after operating Melinda’s Touch, Melinda gained loyal customers and grew her business. With her initial earnings, she was able to purchase equipment and beauty products. By word of mouth, her number of customers increased.
Now, Melinda earns between P1,000 to P2,500 per week from around 50 regular customers. With this, she is able to help her parents and also able to provide good education for her children.

“I feel proud as I am able to do what I love doing, and at the same time, I am able to support my family,” Melinda shared. Melinda’s Touch also accepts hair and make-up services for wedding events and she occasionally invites her former classmates-beauticians to work with her as her assistants.

For Edwin Gialolo of Tacloban City, an elementary drop-out student, Typhoon Yolanda was the culprit to the downfall of his family. Losing hope of finding a good life after what happened, he joined the thousands who were offered resettlement in Manila, and left his family in the ravaged city not telling them where he is going to.
Instead, he found himself becoming a street kid, roaming major thoroughfares begging for money and looking for food scraps, almost lured by local crime syndicates into petty theft. It was the timely rescue by the Center for Community Transformation (CCT) in Pasay City that saved him from his quagmire. He was brought to CCT in its shelter in Magdalena, Laguna and the NGO informed his family that he is staying there presently.
His dorm parents noticed Edwin’s interest is always inside the kitchen, attentive to how food is being prepared. CCT, as a partner of Bayan Academy, offered him to join the Cookery NCII community-based training in its Tagaytay Retreat Center.
“I have always wanted to be like (famous TV celebrity chef) Boy Logro,” Edwin confessed. “I want to become a chef because it is a very in-demand job here in our country and abroad. It also pays well which will help me and my family. I want to build a home for my family where we can live happily and peacefully.”
Edwin said that after passing the TESDA’s Cookery NC II assessment in 2014, he was inspired to finish his primary education at the CCT Magdalena School while at the same time, he worked as Kitchen Assistant at CCT Magdalena.

“I am thankful to JPMorgan for giving me the chance to learn cooking. I will return with pride and a toque on my head, to show to my parents that something fruitful came from my journey to Manila,” Edwin shared.

Styling Himself for a Second Chance

Ronnie Boy Flores of Baseco, Tondo, Manila used to see himself as a wayward child, rebellious and always in trouble. Living in a depressed community like Baseco where clearly the struggle to lead a decent life is real, Ronnie Boy lived like most of his peers and was a source of disappointment to his family.
A friend told him about the JPMC EECD training. He joined but did not take it seriously at first. “I got encouraged mainly for the free food being given during the sessions, the free uniform and transportation allowance,” he confessed. “At first, I did not take the training seriously; our instructors often reprimanded me. I am also not confident about myself as I just finished Grade 3. I have difficulty in reading and writing,” he honestly shared.
In time, he had a change of heart and started to appreciate the lessons being taught. “I realized the worth of learning the skills so that I could earn money the decent way. I also thought I needed to change and become worthy of my family’s respect.”

With this change, he struggled to cut ties with his troubled past. “I got teased and heckled by my former friends every time I passed by and refused to drink with them.”
Even when he finished and started working, it was an uphill climb. He was offered a job in Reyes Haircutters, one of Bayan Academy’s partner-institutions. “Though I learned how to cut, put color and perm hair, I wasn’t given immediately those jobs,” he narrated. “At first I only handled the dust pan and broom for sweeping the customers’ cut hair. In time, he was given more challenging jobs and now he is proud to say that he has handled them well. He also got a regular job in the salon’s branch at Anonas, Quezon City as a senior haircutter.

Ronnie Boy receives P13,000 monthly income from his salary, commissions and tip. He also received other company benefits required by the government.

At present, he is the breadwinner of his family having six siblings. He was able to send his sister to school and now affords to rent a place with his mother outside Baseco.
Ronnie Boy spoke in behalf of his batchmates during their graduation and left a promise: “I promise to put to good use all the things I have learned in order to achieve for myself and my family. We are leaving this place with your dreams for us – to become successful and uplift our families from poverty. Thank you to Bayan Academy and JPMorgan for believing is us when nobody seems to.”
Helping People Lead More Productive Lives

For five years now, the JPMorgan Chase Foundation has been tremendously supporting the plight of disengaged youth and adults in high need urban communities in the Philippines.

Through the JPMC Entrepreneurship Education for Community Development Program, Bayan Academy is set to train 1,049 individuals by the end of 2015 with the objective of preparing them to become productive.

Roberto L. Panlilio, JPMorgan Chase Philippines Senior Country Officer, believes that a productive and financially capable workforce will continue to bring about economic development and progress for the country. "We remain committed to our corporate responsibility agenda and support efforts to build vibrant communities. This program has also become an opportunity for our employee volunteers to mentor our beneficiaries, share their skills and expertise and extend assistance where they can," says Mr. Panlilio.

“Thus, as we continue to touch the lives of many, we need to make sure that our experiences in doing this developmental approach must be documented and shared,” said Dr. Eduardo Morato, Chairman and President of Bayan Academy.

For more information on JPMorgan Chase & Co. Entrepreneurship Education for Community Development Program, visit Bayan Academy at 825 EDSA, Quezon City, call 920-3025 or email This email address is being protected from spambots. You need JavaScript enabled to view it. . (Story/Photos by: Philip Felipe) 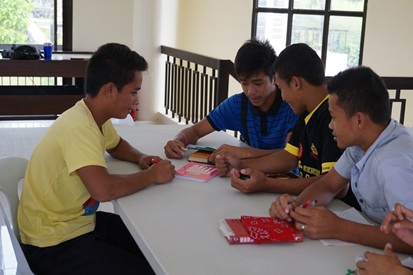 Edwin (left) with his batch mates in a group session.