For a greener Negros: Energy Development Corporation president Richard Tantoco with the St. Paul students who joined him in the ceremonial tree planting. 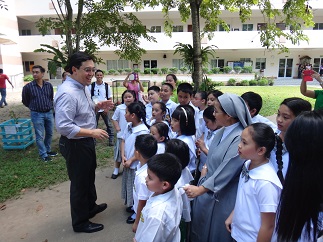 Energy Development Corporation president Richard Tantoco with the St. Paul students who joined him in the ceremonial tree planting.October 10, 2015 has gone down in Negros Island history as the start of a modern-day green revolution with the launch of Energy Development Corporation’s (EDC) 10 Million in 10 for a Greener Negros—the biggest forest restoration movement in one island.

The project expands the company’s BINHI greening legacy program and will pave the way for 10 million trees to be planted, grown and maintained in the next 10 years.

“As we expand our BINHI program, we are raising the bar for environmental stewardship by partnering with as many people and institutions as possible to make 10 million in 10 a fully-committed forest restoration program,” said EDC president and chief operating officer Richard Tantoco.

Tantoco led the unveiling ceremony in St. Paul University-Dumaguete (SPUD) with 58 partner-institutions and other EDC officials.

The launch was highlighted by the signing of a partnership agreement between EDC and its first set of partners led by Negros Oriental Gov. Roel Degamo; Negros Occidental Gov. Alfredo Marañon Jr. who was represented by Eric Loretizo; and Department of Environment and Natural Resources Asec. Marcial Amaro Jr.

To kick off the movement’s tree-growing activities, 40 grade school students from SPUD and the 10M in 10 partners planted 40 premium native tree seedlings to represent EDC’s 40 years of providing clean renewable power to the country.

To join the 10M in 10 for a Greener Negros movement, like and follow Positive Energy Negros on Facebook or email 1010greenernegros@gmail. com. (Story/Photo by: Frances Ariola)