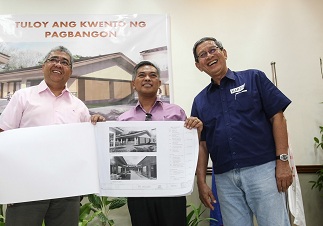 Phase 3 of the school rebuilding program, like Phase 1 and Phase 2, originally focused on rebuilding schools in areas devastated by Yolanda, which struck the country in November 2013.

However, Lopez Group companies have committed to construct schools in areas affected not only by the super typhoon but also by other recent disasters.

Under the expanded school rebuilding program, the target number of classrooms increased from 48 to at least 56, while the number of school sites went up from 18 to 28.

Pledging to shoulder the cost of constructing the new schools are First Gen (16 school buildings), Rockwell Land Corporation (six), First Balfour (four) and First Philec along with ThermaPrime Well Services Inc. (one each).

Energy Development Corporation (EDC) works for free as project manager for the whole school rebuilding program. At the same time, Kananga EDC Institute of Technology redesigned its courses to include three-month training modules, which are offered to Yolanda victims as an immediate livelihood support and as a way of addressing manpower needs of the rebuilding program.

Meanwhile, First Philippine Industrial Park Inc. pledged P1.3 million for the chairs that will be used in the schools donated by First Gen and First Philec.

“Phase 3 will now reach areas with no EDC business footprint but are well deserving of the donation, such as towns in Panay that were also devastated by Yolanda; Bohol, which suffered a destructive earthquake in 2013; and the isolated mountain schools of Bukidnon. We also added some schools in the Bicol provinces as our way of helping them recover from typhoons that frequent the region,” said Leonardo Ablaza, head of the Lopez Group’s school rebuilding program. “By the end of 2016 we will turn over 141 typhoon-resilient classrooms to the Department of Education.” (Story/Photo by: Joel Gaborni)