In September 2012: Ang Misyon began the search to audition and fill up the seats of the Orchestra of the Filipino Youth. OFY was formed with 40 talented kids from underprivileged communities from over 100 who came from all over the country.

Since then they have developed a second performing orchestra the Young Filipinos Orchestra which was formerly the Prep Club Understudy orchestra; 13 satellite community ensembles and several chamber groups who perform as quartets or quintets.

As a testament to Ang Misyon's growing network, glowing skills and tremendous hard work, 7 senior members of the OFY are scheduled to travel to New York, Washington and New Jersey this May . The chosen representatives come from Cebu, Parañaque, Marikina, Taytay, Malabon, Cainta, & Navotas.

They will be performing six concerts in New York, New Jersey, and Washington DC, and will engage in musical activities with the New York Philharmonic, the Harmony Program, the Very Young Composers Program, the Youth Orchestra of St. Luke's, and the American String Quartet

The Orchestra's co-founder and artistic director, internationally multi-awarded Filipino concert pianist Jovianney Emmanuel Cruz will perform with the young musicians in the International Awareness and Educational Tour for Ang Misyon.

The tour is jointly presented by The Board of Trustees, Patrons, Visiting Mentors & Friends of Ang Misyon, Inc.; The New York Philharmonic; The Philippine Consulate General New York; US-Philippines Society; Philippine Arts, Letters, Media (PALM); Xavier High School & Class of 1984; and the Philippine Chamber Rondalla of New Jersey.
Members of the Lopez Group who have friends and family in the locations listed are encouraged to invite a crowd to support the young musicians based in Benpres Building. Email This email address is being protected from spambots. You need JavaScript enabled to view it. for referrals, or to request for invitations which will be sent by the presenting organizations. 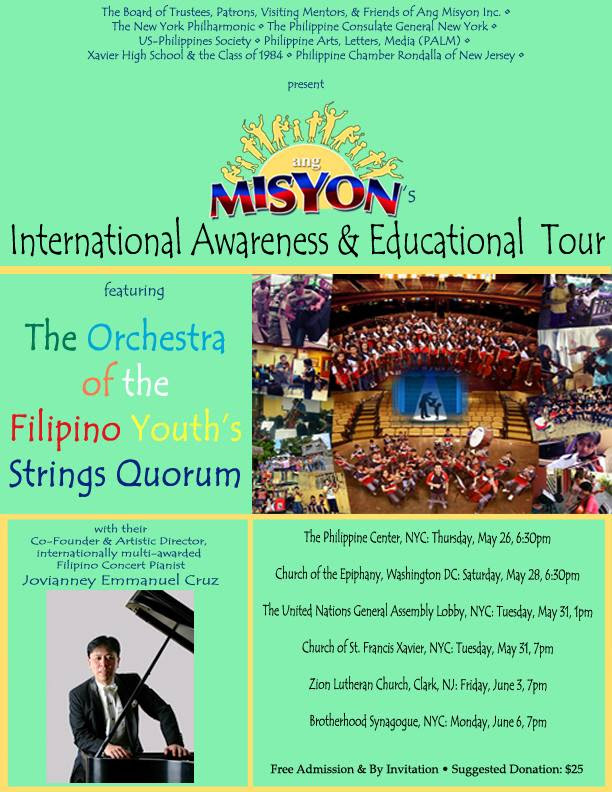