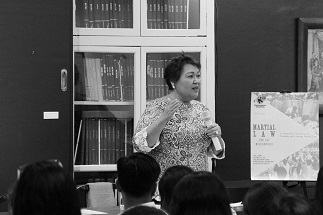 “Martial Law for the Millennials” advocates better understanding of the subject among Filipino youth. Seeing that the lack of knowledge could have stemmed from how the topic was taught in the basic education curriculum, KCFI developed a way to address it.

The initial run on September 21 at the Lopez Museum was attended by almost 80 teachers from different school divisions.

The second workshop on October 27, with more than a hundred teachers and Department of Education (DepEd) division representatives in attendance, featured director Jose Javier Reyes, who is also a senior professional lecturer at De La Salle University.

KCFI president Rina Lopez- Bautista also shared the Lopez family’s struggles during martial law. When the government seized ABS-CBN, among their many other businesses, the broadcasting network was shut down while its chairman, Eugenio Lopez Jr., was imprisoned.

Doris Nuval, KCFI head for Access and a freedom fighter during martial law, presented a documentary produced by Film Australia entitled “Fearless: Stories of Asian Women,” a narrative of her life as the longest female prisoner of the era. The film is now being used as a learning resource in some Asian schools.